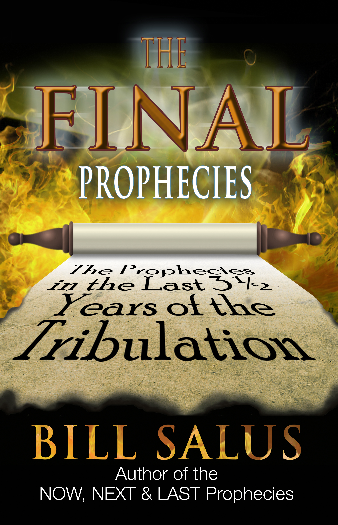 “Then the fifth angel poured out his bowl on the throne of the beast, and his kingdom became full of darkness…” (Revelation 16:10a)

This article is taken from my book entitled, The FINAL Prophecies, The Prophecies in the Last 3 ½ Years of the Tribulation. In the book I track down the eternal city of Rome as the likely location of the “throne of the beast,” but this article will primarily focus upon the expanse of the “darkness” that overtakes the Antichrist’s “kingdom.”

The throne of the Beast gets struck by the outpouring of the Fifth Bowl Judgment, and as a result God’s wrath spreads out like a cloak of darkness over the entire kingdom of the Beast. This specific judgment seems to happen toward the end of the Seven-Year Tribulation Period. I guesstimate around year six. What’s important to note, is that by the time the Fifth Bowl Judgment turns the kingdom of the Beast into darkness, his empire will have achieved a worldwide reach.

The birth of his global kingdom begins in Rev. 17:12-13, whereby the Antichrist divides the planet into ten territories and appoints ten rulers over each province. Then in Rev. 17:16-17, after these Ten Kings desolate the global religion of the Harlot, they give sovereign control of their own respective regions, including the spoils of the taken over religious system, to the kingdom of the Beast.

Possessing control over the international community, the Antichrist and the False Prophet implement their cashless society as per Rev. 13:17. Everyone’s survival at this time heavily depends upon one’s ability to buy and sell within this financial system. This implies that when the darkness from the Fifth Bowl Judgment befalls upon the kingdom of the Beast it has a global impact.

From the scorching sunlight heat of the fourth bowl in Rev. 16:8-9 to the darkness generated by the fifth bowl in Rev. 16:10, mankind is involuntarily transitioned from one extreme to the other. The punishing blows of the bowls intensifies with each sequential outpouring. Already paining from loathsome sores, (Bowl #1), and thirst due to bloodied rivers and springs of water, (bowl #3), those worshipping the Beast, and by now bearing his Mark in order to buy and sell, must now face a blinding darkness. 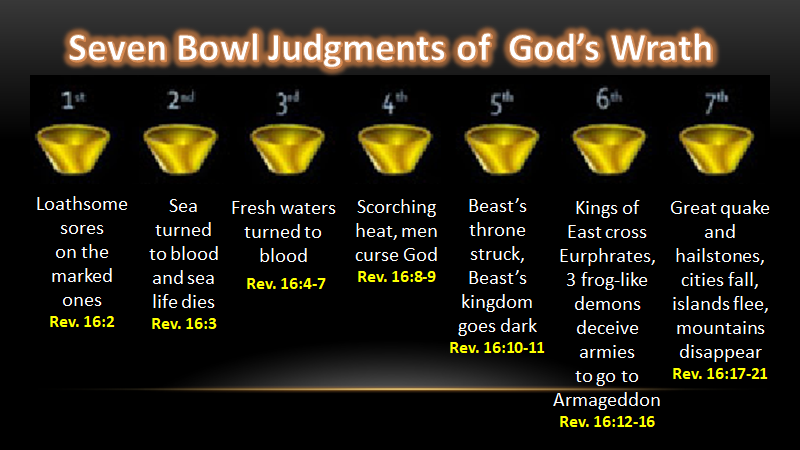 Darkness plaguing a kingdom is not a new phenomenon, but finds biblical precedent in the passage below.

“Then the Lord said to Moses, “Stretch out your hand toward heaven, that there may be darkness over the land of Egypt, darkness which may even be felt.” So Moses stretched out his hand toward heaven, and there was thick darkness in all the land of Egypt three days. They did not see one another; nor did anyone rise from his place for three days. But all the children of Israel had light in their dwellings.” (Exodus 10:21-23)

These three verses above tell us that a plague of darkness can be “felt,” is “thick,” and can last for “three days.” Moreover, during those three days people are unable to “see one another” or take leave “from his place.”

When the plague of darkness struck Egypt thousands of years ago there was no electricity. Apart from the natural sun by day and moon by night, the primary sources of manufactured lighting were candles, lamps and fires. Apparently, the thick darkness that could be felt over Egypt had an extinguishing effect on all three of these light sources. The description makes it sound like the Egyptians had no interior or exterior illumination whatsoever.

The debilitating darkness could perhaps be likened to the thickest of fire-retardant black blankets in which, when it’s:

1. Lifted up, blocks out all light above it,
2. Spread out, promptly extinguishes any flame,
3. Hung up, serves as an impenetrable barrier,
4. Laid down, smothers like a straight-jacket.

That’s what happened to Egypt way back then, but how will the Antichrist’s kingdom be affected in the future when:

• Electricity is existing,
• Computers are running,
• Streetlights are shining,
• Billboards are bannering,
• House lamps are lighting,
• Technologies are operating,
• Internet information is flowing,
• News videos are live streaming,
• Artificial Intelligence is functioning,
• Blockchain transactions are recording,
• Cryptocurrencies are buying and selling,
• And, the cashless global economy is booming?

In order to repeat on a worldwide level, a similar plaguing effect like what occurred in Egypt, it would seem that some, if not all of the above, will need to at least temporarily, be shut down! The former thick darkness was able to extinguish the candles, wicks and flames of the past, but will it be sufficient enough to render some of the above inoperable? Hackers have already tried to shut some technologies down. What will God do differently to spread darkness over the entire kingdom of the Beast?

The only man-made technology that could have a chance at shutting down some of the above systems is an Electromagnetic Pulse weapon (EMP). Does God intend on landing a lightning strike or sending a solar flare over the throne of the Beast that has the EMP capability of frying all of the electronic systems in operation on the earth at the time? Is this even feasible on a planetary scale?

The answer must be yes, but whether it’s a cosmic EMP or something else, the point is that the darkness is likely real, global, thick, felt, blinding, quarantining and likely lasts for three or more days. Also, what about the sunshine and moonlight as sources of natural light? Does God unplug them during this period?

The potential connection between Rev. 16:10 and the events of Rev. 18:9-20 is that the spread of the darkness seemingly shuts down the global cashless economy of the Antichrist. Somehow the Fifth Bowl Judgment strategically destroys the great city where the throne of the Beast is, and as a result the technological wherewithal to further operate the commercial system somehow collapses. This theory partially presumes that the headquarters of the Antichrist may serve as the epicenter of his global financial system.

This darkness could be why when the great city headquarters of commercial Babylon gets taken out in one hour, that the merchants of the earth will no longer be able to sell their goods and services. This inability to sell is not for lack of products, the merchandise is still available, rather it’s because the ability to transact has been disabled due to the plague of darkness.

“And the merchants of the earth will weep and mourn over her, for no one buys their merchandise anymore.” (Rev. 18:11)

The Fifth Bowl Judgment hits the great city headquarters of the Antichrist and at some point, probably not so long after, the lights begin going out. Before everything electrical and technological within the great city shuts off entirely, the explosion that rocks this great city is likely caught on camera and broadcast around the world. When the world leaders see the smoke from the burning city, they begin to “weep and lament.” These leaders don’t race to the rescue, but due to the magnitude of the attack, they stand back “at a distance” in fear.

“The kings of the earth who committed fornication and lived luxuriously with her will weep and lament for her, when they see the smoke of her burning, standing at a distance for fear of her torment, saying, ‘Alas, alas, that great city Babylon, that mighty city! For in one hour your judgment has come.’” (Rev. 18:9-10)

In the span of an hour, commercial Babylon is destroyed and at some point shortly thereafter, it appears the darkness that overtakes the great city begins to spread over the entire empire of the Beast. As the cashless economy shuts down, the merchants realize that they can no longer sell their goods and services.

The shipmasters are next to realize their newfound bankrupt condition. Their ships are stranded out upon the seas, likely filled with cargo that no longer has value. There are no more buyers for these products because the technological ability to buy has been destroyed. We are informed that these shipmasters, like the kings of the earth, also keep a safe distance from the burning smoke.

“Every shipmaster, all who travel by ship, sailors, and as many as trade on the sea, stood at a distance and cried out when they saw the smoke of her burning, saying, ‘What is like this great city?’ “They threw dust on their heads and cried out, weeping and wailing, and saying, ‘Alas, alas, that great city, in which all who had ships on the sea became rich by her wealth! For in one hour she is made desolate.’” (Rev. 18:17b-19)

How Long does the Darkness Last?

If the darkness from the Fifth Bowl Judgment finds an association with the destruction of the great city headquarters of commercial Babylon and the collapse of the global economy, then how long will this darkness last?

Although the potentially thick and heavy darkness that envelops the planet will likely lift eventually, the economic operating systems could remain shut down indefinitely. The kings and merchants of the earth and their shipmasters are weeping for a good reason. When Rev. 18:11 informs that the merchants of the earth weep because, “no one buys their merchandise anymore,” it probably means that no one anywhere in the world “buys their merchandise ANYMORE!”

The merchandise is identified in the passage below, which points out that these wares range from luxury and transportation items to dairy products and baking goods. Unfortunately even “bodies and souls of men” are trafficked within the Antichrist’s global economy.

Some commentators suggest that the one-hour destruction of commercial Babylon only adversely affects the consumer activity occurring within the city, but the items identified above appear to be manufactured from various parts of the world and used internationally. When it says that, “no one buys their merchandise anymore,” it likely alludes the global marketplace being CLOSED FOR BUSINESS.

If this is the case, then when the physical phenomenon of darkness removes itself, the material complications of getting the cashless economy back on track becomes the challenge. When the darkness lifted over Egypt, the Egyptians had to get back to the business of buying and selling. The same scenario could reoccur, but on a grander global scale in this end times scenario.

When the darkness lifts and the people who have the Mark of the Beast are able to move about and interact again, they will seek a return to buying and selling. However, herein could lie the larger problem; they may no longer be able to transact! If the entire financial system is put into dire straits, then no amount of digital dollars, cryptocurrencies or blockchain technologies can resurrect it. Maybe there’s hope that the system can be restored, but what if God shuts it down again?

The problem seems to be less about the system and more about the divine being that has demonstrated the worldwide wherewithal to shut it down again and again. This would mean that God has to be handcuffed somehow before global economic normalcy can be reinstated.

So then, when the darkness lifts, the people continue to blaspheme God and look for a way to triumph over Him. Remember, that many of them are still suffering from the painful sores of the First Bowl Judgment, which they likely realize also came from the same source that created the plague of darkness!

“…and they gnawed their tongues because of the pain. They blasphemed the God of heaven because of their pains and their sores, and did not repent of their deeds.” (Rev. 16:10c-11)

This international dilemma prompts Satan, the Antichrist and False Prophet to design a deceptive super plan that calls upon three elite evil spirit beings to gather the kings and their armies to Armageddon. How this story develops is detailed in the Sixth Bowl Judgment, which is explored in The FINAL Prophecies book.