The Israeli Defense Forces (IDF) in the Pre-Tribulation Prophecies

By Bill Salus
(Article taken from The Pre-Tribulation Prophecies: A Prophetic Documentary)
(Watch the trailer below) 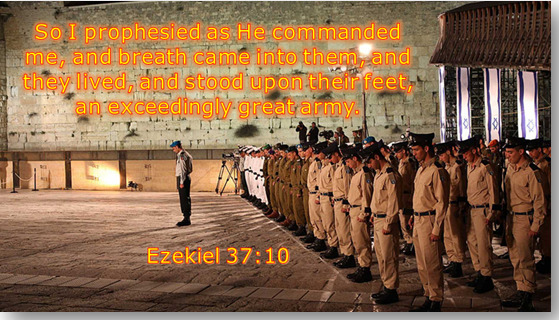 From swords, shovels, axes and pitch forks, the typical weaponry associated with refugees, to F-35 fighter jets, Iron Dome missile defense systems and Nuclear Warheads, those resilient Israeli Defense Forces (IDF) have managed to defend a nation that for all intents and purposes should have been wiped off the map a few decades ago. Coming out of 1,878 years of worldwide dispersion and the Holocaust, the Jews have managed to muster up a mighty military machine that in just over seven decades now threatens to send Iran’s nuclear program back to the “Stone Age”.

According to an ancient prophecy in Jeremiah 49:34-39, that may be what’s about to happen. Around 596 BC, the prophet Jeremiah predicted a future time when Iran would experience and epic disaster. Details within this prophecy suggest that the calamity could be from a military strike that creates a nuclear disaster. I explore and explain these details in the DVD entitled, The Pre-Tribulation Prophecies.

What are Pre-Tribulation Prophecies?

The Pre-Tribulation timeframe encompasses the Church Age that is followed by a mysterious gap of unspecified time. I call this gap, the Post-Rapture / Pre-Tribulation Gap because it happens after the Rapture of the Church, but before the start of the Tribulation Period.

The logic behind this gap comes with the understanding that it’s not the Rapture that triggers the Tribulation Period, but it’s the ratification of the Seven-Year Covenant between Israel and the “many” in Daniel 9:27 and Isaiah 28:15. In Bible prophecy, the Tribulation Period is also known as “Daniel’s Seventieth Week.” 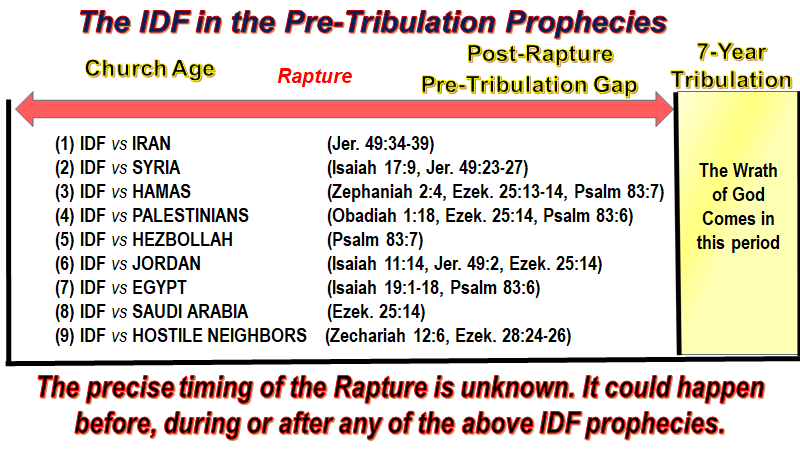 The IDF is Identified in Pre-Tribulation Prophecies

“So I prophesied as He commanded me, and breath came into them, and they lived, and stood upon their feet, an exceedingly great army.” (Ezek. 37:10)

The ongoing Arab – Israeli conflict has forced Israel to form a great army. The IDF has had to become the superior military in the Middle East as a matter of national survival.

In addition to Ezekiel 37:10, prophecies written in Psalm 83, Isaiah 11, Jeremiah 49, Obadiah, Ezekiel 25, Zechariah 12, there are several more verses that identify today’s IDF. Below are only a few examples of what appears to be alluding to what today’s IDF will be soon accomplishing. The Pre-Tribulation Prophecies DVD set reveals all of the prophecies related to today’s IDF.

“For I will cause Elam (Western Iran) to be dismayed before their enemies (including Israel) And before those who seek their life. I will bring disaster upon them, My fierce anger,’ says the Lord; ‘And I will send the sword (military invasion) after them Until I have consumed them.” (Jeremiah. 49:37, NKJV; emphasis added)

(Unlike the following war prophecies, whereby the IDF is clearly identified, the Iran war does not specifically identify the invaders, but presumably Israel will be one of them).

IDF vs PALESTINIANS
As you read these next two prophecies, it’s important to know that the ancient Edomites have ethnical representation within the Palestinians today.

IDF vs PALESTINIANS and SAUDI ARABIA

“Thus says the Lord God: “Because of what Edom did against the house of Judah by taking vengeance, and has greatly offended by avenging itself on them,” therefore thus says the Lord God: “I will also stretch out My hand against Edom, cut off man and beast from it, and make it desolate from Teman; Dedan (Saudi Arabia) shall fall by the sword. I will lay My vengeance on Edom (the Palestinians) by the hand of My people Israel, (the IDF) that they may do in Edom according to My anger and according to My fury; and they (the Palestinians) shall know My vengeance,” says the Lord God. (Ezekiel 25:12-14, NKJV; emphasis added)

“In that day his (Damascus and other) strong cities (in Syria) will be as a forsaken bough And an uppermost branch, Which they left because of the children of Israel; (the IDF) And there will be desolation.” (Isaiah 17:9, NKJV; emphasis added)

“Therefore behold, the days are coming,” says the Lord, “That I will cause to be heard an alarm of war in Rabbah (Amman, Jordan) of the Ammonites; It (Amman, Jordan) shall be a desolate mound, And her villages shall be burned with fire. Then Israel (the IDF) shall take possession of his inheritance,” (this territory is within the Promised Land of Genesis 15:18) says the Lord.” (Jeremiah 49:2, NKJV; emphasis added)

“I have heard the reproach of Moab (Central Jordan), And the insults of the people of Ammon (Amman, Jordan), With which they have reproached My people, (Israel) And made arrogant threats against their borders. Therefore, as I live,” Says the Lord of hosts, the God of Israel, “Surely Moab shall be like Sodom, And the people of Ammon like Gomorrah—Overrun with weeds and saltpits, And a perpetual desolation. The residue of My people (the IDF) shall plunder them, And the remnant of My people shall possess them.” (Zephaniah 2:8-9, NKJV; emphasis added)

IDF vs THE HAMAS

“But they (the Israeli Air Force)shall fly down upon the shoulder of the            Philistines (Gaza) toward the west; Together they shall plunder the people of the East; They shall lay their hand on Edom and Moab; (Jordan) And the people of Ammon (Jordanians) shall obey them.” (Isaiah 11:14, NKJV; emphasis added)

“In that day I will make the governors of Judah (the IDF) like a firepan in the  woodpile, (the warzone) and like a fiery torch in the sheaves; they shall devour all the surrounding (Arab) peoples on the right hand and on the left, but Jerusalem shall be inhabited again in her own place—Jerusalem.” (Zechariah 12:6, NKJV; emphasis added) 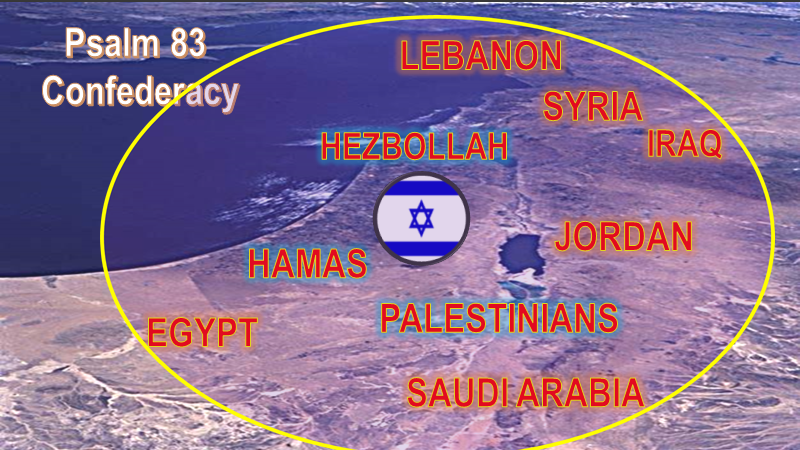 These are just a few prophecies that predict the IDF will defeat their Arab foes. These battles seem to be part of the larger prophecy in Psalm 83, which predicts how the modern-day Arab-Israel conflict will conclude. According to the Bible, it won’t be land for peace deals or two-state solutions, rather it will be an epic war in which the IDF will prevail.

The Pre-Tribulation Prophecies DVD points out that the purpose of this army is to protect Israel from its surrounding enemies who someday confederate in a final attempt to destroy the Jewish State of Israel according to Psalm 83. This statement is qualified by recognizing that the IDF is not part of prophecies related to Ezekiel 38 or the Armageddon Campaign of the Antichrist.

There are three major prophetic invasions of, or in, Israel that are yet to find final fulfillment. They are:

3. Armageddon – The Antichrist Genocidal Attempt of the Jews.

Is the IDF Involved in the Ezekiel 38 Prophecy? 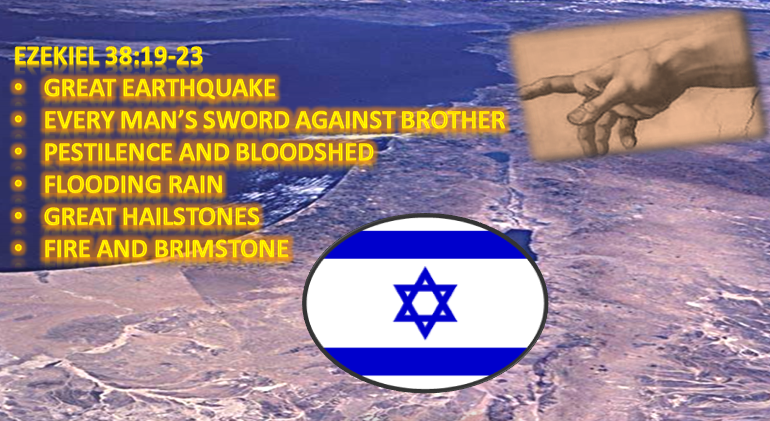 “So I will make My holy name known in the midst of My people Israel, and I will not let them profane My holy name anymore. Then the nations shall know that I am the Lord, the Holy One in Israel.” (Ezekiel 39:7)

The main reason that the IDF is not involved in Ezekiel 38 is because the Lord defeats these Ezekiel invaders supernaturally. Ezekiel 38:19-22 declares that these armies will be defeated by:

2. Every man’s sword will be against his brother,

3. There will be pestilence and bloodshed,

Is the IDF Involved in the Battle of Armageddon?

The answer to this question is also NO! The Armageddon campaign is stopped by Jesus Christ single-handedly. This happens at the Second Coming of Christ. The fact that Christ goes it alone is detailed below.

“Who is this who comes from Edom, (Petra, Southern Jordan), With dyed garments from Bozrah, This One who is glorious in His apparel, (Jesus Christ), Traveling in the greatness of His strength?—“I who speak in righteousness, mighty to save.” (The Messiah, Jesus Christ), Why is Your apparel red, (with the blood of His enemies), And Your garments like one who treads in the winepress?  “I, (Jesus Christ) have trodden the winepress alone, (the battlefield), And from the peoples no one was with Me. (No IDF involvement), For I have trodden them, (the Antichrist and his armies involved in Armageddon), in My anger, And trampled them in My fury; Their blood is sprinkled upon My garments, And I have stained all My robes. For the day of vengeance is in My heart, And the year of My redeemed, (the believing remnant of Israel), has come.  I looked, but there was no one to help, (No IDF involvement), And I wondered That there was no one to uphold; (No IDF involvement), Therefore My own arm, (single-handedly), brought salvation for Me; And My own fury, it sustained Me.  I have trodden down the peoples in My anger, (the Antichrist and his armies), Made them drunk in My fury, And brought down their strength to the earth.” (Isaiah 63:1-6, NKJV; emphasis added)

As these Isaiah verses clearly point out, the IDF is not involved in the defeat of the Antichrist and his armies involved in the Armageddon campaign. Nor are the IDF playing an instrumental role in the defeat of the Ezekiel 38 invaders. Thus, we can safely conclude that a primary purpose of the role of today’s IDF in Bible prophecy is to defend the nation against the final Arab-Israeli wars predicted in Psalm 83 and the related peripheral prophecies disclosed above.

How do we Know the IDF is in the Pre-Tribulation Prophecies?

Having narrowed the prophetic field down from the IDF’s role to the Arab-Israeli conflicts and not the Ezekiel 38 invasion or Battle of Armageddon, we can now determine why the IDF is active in the Pre-Tribulation Prophecies. The Seven-Year Tribulation Period is divided up into two halves, each consisting of 3 ½ years.

In the first 3 ½ years the Jews are living in a condition of peace, which is the result of having confirmed the peace agreement in Daniel 9:27. Thus, the IDF is not fighting any wars against their Arab enemies.

At the midpoint of the Tribulation Period, this peace-pact is broken as per Daniel 9:27 when the Antichrist desecrates the Jewish Temple that will be built by then. This event is called the “Abomination of Desolation” and Jesus Christ warned the Jews that when this happens to flee for safety immediately.

“Therefore when you see the ‘abomination of desolation,’ spoken of by Daniel the prophet, standing in the holy place” (whoever reads, let him understand), “then let those who are in Judea flee to the mountains. Let him who is on the housetop not go down to take anything out of his house. And let him who is in the field not go back to get his clothes.” (Matthew 24:15-18)

The reason Jesus Christ issued this warning was to inform the Jewish people that the Antichrist was going to promptly begin a campaign of Jewish genocide. The verse below points out that millions of Jews will be killed at that time.

“And it shall come to pass in all the land,” Says the Lord, “That two-thirds in it shall be cut off and die, But one-third shall be left in it.” (Zechariah 13:8)

Thus, the Jews are fleeing for their lives and not fighting Arab wars in the last 3 ½ years of the Tribulation Period. After this period comes the Millennium and the Jews are not fighting, nor even learning about wars in this period. Their weapons are being converted into farming implements.

“He (Jesus Christ) shall judge between the nations, And rebuke many people;  They shall beat their swords into plowshares, And their spears into pruning hooks; Nation shall not  lift up sword against nation, Neither shall they learn war anymore.” (Isaiah 2:4, NKJV; emphasis added)

This article pointed out that the IDF clearly exists in Bible prophecy. They have emerged to defend the nation of Israel from its Arab enemies. These wars will happen before the Seven-Year Tribulation and you dear reader, may be about to witness the IDF fulfill one or more of these prophecies, that is, unless Jesus Christ comes and Raptures His Church beforehand.

For more information about these prophecies buy your copy of The Pre-Tribulation Prophecies Prophetic Documentary 2-disc DVD set below.

WATCH THE PRE-TRIBULATION PROPHECIES TRAILER BELOW.