(Article taken from The Pre-Tribulation Prophecies: A Prophetic Documentary)

This article is intended to acquaint you with the top twenty Pre-Tribulation prophecies. These are ancient predictions that are about to roll off of their parchments soon and pound down on the world’s pavement. These are globally impacting events that could happen before the Seven-Year Tribulation Period begins. Thus, it’s possible that the Christian Church might actually witness the fulfillment of some of these perilous biblical predictions before it gets Raptured.

Over the past seven years, I have had the opportunity to author five books and DVDs in an end times prophecy series. The goal of these non-fiction works is to explore, explain and sequence all of the unfulfilled prophecies that will happen on the last days 10-stage timeline. (Refer to the image). 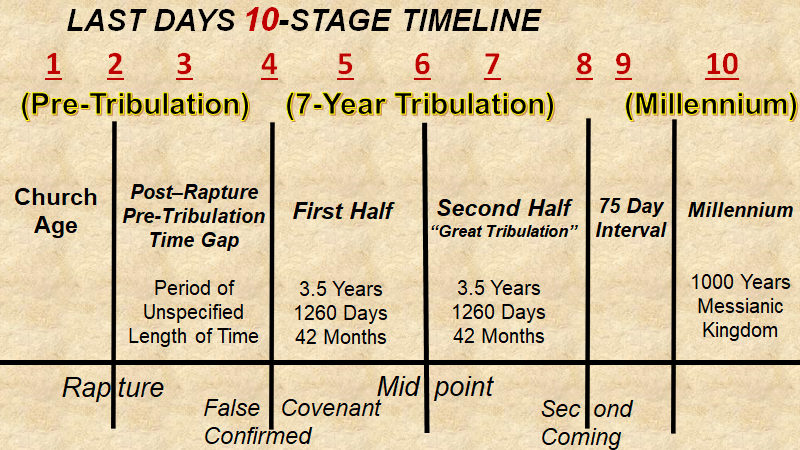 Twenty-five hundred days, thirteen hundred pages, one-hundred chapters and twelve appendices later, I feel compelled to tell you that, in my educated estimation, the landscape, environment, economy and geo-politics of this present world are all about to change quickly and dramatically!

All of the end times signs are converging. The required technologies are developed, the apocalyptic weapons are fashioned, and the evil political leaders and their wicked national relationships are in place for every Pre-Tribulation prophecy to find fulfillment soon.

In the event that the long-suffering and merciful Heavenly Father tarries from sending His Only Begotten Son Jesus to come Rapture His Bride, Christians need to brace themselves for the rough road ahead. Survival in these last days will largely depend on a Christian’s ability to know what prophecies are coming, prepare for their arrival and endure their adverse effects when they happen.

Although Christians are instructed to remind and comfort one another about the imminence of the Rapture, they should also resist the lackadaisical attitude that leads them to think they will be Raptured before the bad stuff happens. The Rapture is only one of the Pre-Tribulation prophecies and there could be a photo-finish between the Rapture and several other prophecies. 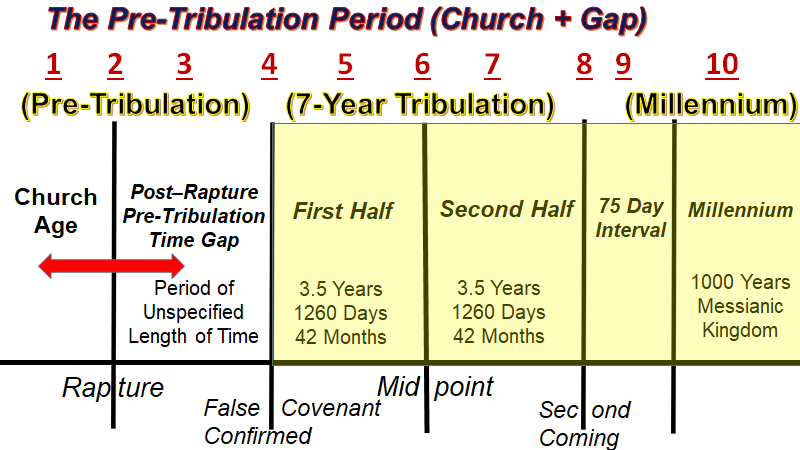 The Pre-Tribulation period includes the Church Age and the Post-Rapture / Pre-Tribulation Time Gap. The Church Age ends when the Rapture happens. Then mankind enters into a pre-tribulational interval period of unspecified time. This time gap concludes when the Antichrist confirms the false covenant of Daniel 9:27 and Isaiah 28:15.

For those unfamiliar with this mysterious time gap, it is based upon the premise that it’s not the Rapture that triggers the Seven-Year Tribulation Period, rather it’s the ratification of the false covenant that kick-starts it. Many of today’s top Bible prophecy experts believe this interval period exists, such as: Dr. Mark Hitchcock, Dr. David Reagan, Gary Stearman, Tom Hughes, me and the late Dr. Tim LaHaye (1926-2016) and Dr. Chuck Missler (1934-2018), just to name a few. Some of us suggest that this time gap could last for several years. 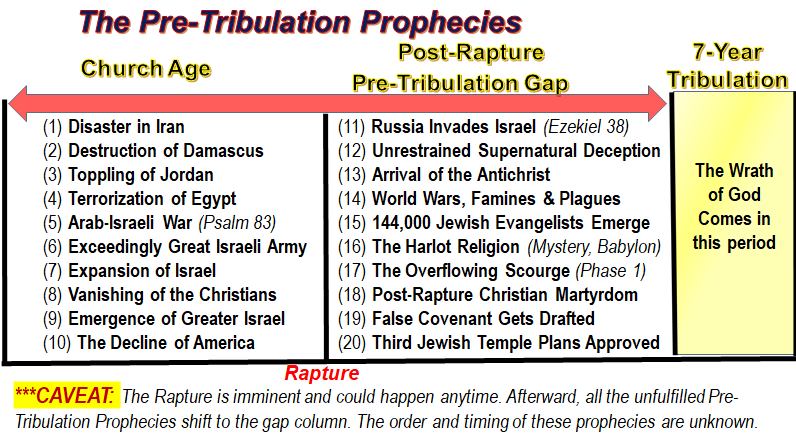 The top twenty Pre-Tribulation prophecies are the subject of a prophetic documentary produced by Thomas J Hughes ministries with Hope For Our Times and me. It is a 2-Disc DVD set that provides approximately 2 ½ hours of timely prophetic information. We encourage you to watch the short video promo trailer at the top of this newsletter.

The top twenty Pre-Tribulation Prophecies with related verses are:

(Some teach that the 144,000 evangelize exclusively in the Tribulation, rather than first emerging in the gap and then crossing over into the Tribulation).

20. Preparations to Build the Third Jewish Temple are Approved– (Revelation 11:1-2).

21. Also, another Pre-Tribulation scenario worth mentioning are the three seemingly connecting Gaza, (ancient Philistia), prophecies that appear to predict the elimination of Hamas in Psalm 83, Zephaniah 2:4-7 and Ezekiel 25:15-17. 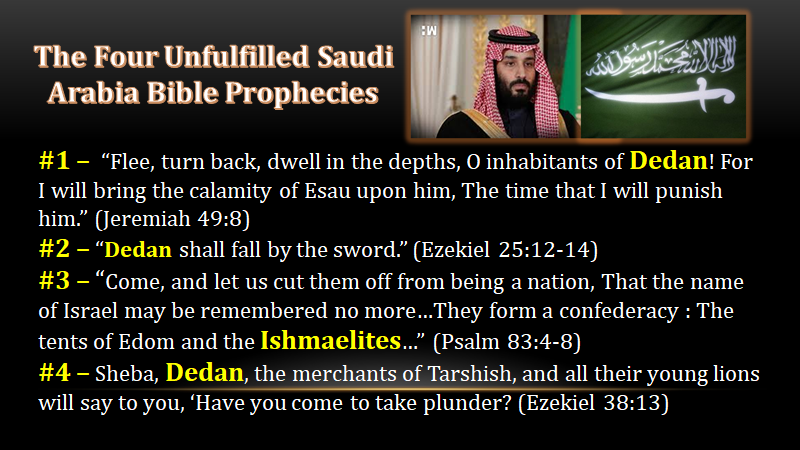 (Ancient Dedan was located in SW Saudi Arabia and the Ishmaelites descended from Ishmael, who is believed to have lived in what is now modern-day Saudi Arabia. These four prophecies are thoroughly explained in The Pre-Tribulation Prophecies DVD)

All of these twenty plus prophecies identified above are potentially going to be globally impacting. Although some of them are centered in the Middle East, they will likely increase international terrorism, lead to worldwide oil and gas shortages, fuel economic collapses, provoke geo-political upheavals and result in unprecedented humanitarian calamities.

If the menu of devastating events above isn’t frightening enough it only gets worse from there. Once prophecies #19 and #20 are fulfilled, the false covenant gets confirmed by the Antichrist and the Seven-Year Tribulation Period commences. During those final seven years this planet and the people left behind will face off with the Wrath of God.

The planet gets destroyed and billions of people are killed. I have written extensively about this tribulational period in my LAST Prophecies and FINAL Prophecies books. The good news is that the Church is:

The bad news is that believers have loved ones who are presently unsaved and at risk of being left behind to experience the most perilous seven-years in all of post-flood history.

In closing let me speak to three prevalent Christian attitudes.

(1) I DON’T CARE: “I’ll be Raptured, so why should I worry about such things that don’t concern me.” I would encourage someone who has adopted this position to first, realize that you may be here to endure some of the Pre-Tribulation prophecies. If you face off with one or more of these powerful predictions, you will undoubtedly be forced to care! Therefore, be cautious not to get caught up in the trap of thinking that the rest of your days will be persecution free.

Second, be more compassionate toward your unsaved family, friends and neighbors. Put yourself in their future shoes. If they get saved after the Rapture they will have to survive through three periods of Christian martyrdom that follows the Rapture. (Refer to the image).

(These three periods of martyrdom are thoroughly unpacked and explained in The Pre-Tribulation Prophecies DVD).

(2) I’M BURNED-OUT: “I am blue in the face from trying to witness to my loved ones and teach them about the Rapture and the Tribulation Period that follows.” Get a second wind. The end times signs are converging and that should excite you and reignite the flame you once had to share the Good News about Jesus Christ. Your loved ones are watching the same crazy current events unfold that you are. Their once deaf ears are listening, blind eyes are opening and hard heads are ready for some fresh Bible-Thumping! Besides, you don’t want them to get LEFT BEHIND!

(3) I CARE AND WANT TO SHARE: “I’m expecting Jesus Christ to come Rapture us out of here soon and I want to redeem the little bit of borrowed time we have remaining.” I encourage you to watch The Pre-Tribulation Prophecies prophetic documentary. It is your friend in need that will strengthen your faith and hope in Jesus the Messiah and provide you with the up-to-date prophetic perspective of current events. With this information in heart, head and hand, you will be thoroughly equipped to share your faith with your loved ones. 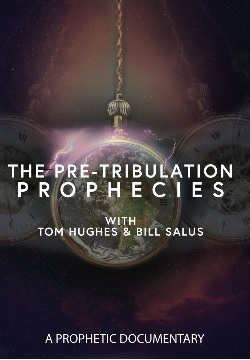 WATCH THE PRE-TRIBULATION PROPHETIES TRAILER BELOW.