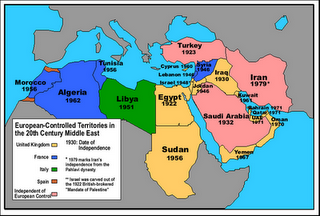 My dear friend Dr Lawrence Prabhakar Williams from India, who focuses on academic and policy research on strategic issues, sent me this recent Mideast update.

I had yet another round of working group meetings anchored by the US National Defense University, Near East South Asia Center, Washington DC in Ankara, Turkey July 13-15 2011.

I came back home yesterday early morning. I thought I should send you the note of what I perceived the prevalent political and strategic mood in the Greater Middle East.

By Greater Middle East, I imply the Psalms 83 10-member Arab coalition and the Ezekiel 38-39 9-member coalition. The following points may be of interest and inference into what is happening in the region. The meeting participants are US Govt diplomats, policy-strategic analysts, military personnel serving and retired, serving and retired diplomats etc. The countries are Morocco,Tunisia, Turkey, Israel, Palestinian Authority, Egypt, Jordan, Iran (this time the participant was refused a visa by Turkey), UAE, Oman, Pakistan, India, Bangladesh, Sri Lanka etc.

Several of the 33 countries were not represented since there had been reasons why they could not come.

Now the points of the prevalent mood”:

1). Energy (read Oil and Natural Gas) and Water are now the important catalysts for a new war; in both issues Israel is viewed as the “villain”. Since Israel has discovered the huge deposits in the Mediterranean off Haifa; the contention is that these deposits belong to the “Palestinian State” and “Lebanon” That’s the Arab contention;

IMPORTANT: War is not ruled out as an option by the Hezbollah for Lebanon and Hamas for the Palestinians;

2). Natural Gas from Egypt is not flowing consistently to Israel and therefore to Jordan; Muslim Brotherhood that is the “grey eminence” is behind the blasts in the Sinai Egypt-Israel-Jordan pipeline; but the blame is on Al-Qaeda (it makes no difference since both are two sides of the same coin)

4). There has been a perceptible sense of an appetite for “nuclear energy” also known in the strategic policy world as “nuclear renaissance”. UAE has gone ahead with a US-UAE “Peaceful Uses of Civilian Nuclear Energy Agreement” (under Sec 123 of the US Atomic Energy Act); but in my queries with the UAE participant on the physical risk factors, liability issues, technical operational issues–they are clueless, they are heavily relying on US, French, South Korean assistance; earlier Egypt, Jordan and even Saudi Arabia, Morocco had very keen interest. Egypt wanted one on the Israeli border in Mubarak’s time so that the electricity generation could be shared with Israel, Egypt and Jordan; but with the Tahrir Square, Israel’s Premier Netanyahu has shut down the proposal; Israel has plans for a civilian nuclear energy program, but they are not activating it since the gas deposits are now dampening the Israeli enthusiasm for nuclear energy;

However, their active military applications of nuclear technology is all in full active posture; but as you know they “neither confirm nor deny”; “neither the first to introduce nuclear weapons nor would be the last”;

5). The Iranian roaming potential in the region has increased, potentially in the Red Sea-Suez Canal under the watchful eyes of the IDF; Iranians are also roaming in areas where Israeli submarines are there; so a hide-and-seek game is now on; The Iranians are continuing their nuclear activities with the recent announcement that the Bushehr nuclear plant to be “loaded” again.

IMPORTANT:The Iranians are completely in a ‘denial mode’ that the region where their nuclear infrastructure is located and built are seismically highly sensitive; they are population centres and also border the Persian Gulf opposite to what they call the “US-Western Gas stations” of UAE, Qatar, Bahrain, Saudi Arabia etc. Their contention is highly polemical,that if a nuclear accident like the Japanese Fukushima crisis occurs; then it is the “will of Allah to bring destruction on the US-Western Gas stations and the US navy in the region: this implies that they are ready for their 12th Imam who would use the nuclear catastrophe to save them while they could play merry in the Strait of Hormuz (Read my essay in Prophecy depot website “Peril Awaits at the Strait of Hormuz” accessed in : http://www.freerepublic.com/focus/f-religion/2557996/posts

6). The Iranians are now conducting a variety of naval maneuvers all over the place with an increasing emphasis on anti-ship missilery and are even boasting that they could sink US aircraft carriers: “Iranian commander: US aircraft carriers target if Islamic Republic attacked” http://ca.news.yahoo.com/iranian-commander-us-aircraft-carriers-target-islamic-republic-103025980.html

Assessments by an earlier US Marine Corps Gen Paul Von Ripper in a Pentagon simulation game concurred that the Iranians using their Russian supplied Yakhonts and Sunburns could knock out the aircraft carriers meaning paralysing them though sinking would not be possible: See “Myth Of US Invincibility Floats In The Persian Gulf” http://www.rense.com/general64/fore.htm

7). The Iranians are keen to meddle into the Mediterranean gas fields in a potential stoking of war between Israel-Lebanon/ Hezbollah; Israel-Hamas with their ships often calling in Lebanese ports or transiting Suez in what they call Iranian power that creates “peaceful presence” in the Mediterranean http://english.farsnews.com/newstext.php?nn=8912040630

That is implied in what Bill writes in his book Isralestine about the possible role of Iran/Elam/ Persia;

8). The US role: Interesting; Janus faced; trying to be-good to all Islamic regimes including Iran; but in reality are preparing for hostilities; it is clearly evident that in all the conversations and discussions that the US has commenced its “distancing” with Israel. The US is bending backwards (thanks to its economic health;) overtly appeasing the Islamic regimes and “throwing Israel under the bus” . Whenever the Israeli participant spoke there was a unison to contend with him; in more than one occasion, I had retorted against the other members pointing out their puny response to a brinkmanship-catastrophe minded Iranian regime while attacking Israel. In this meeting and the previous ones, my Indian colleagues and I had always stood with the Israeli participants and supported their stand; but we were surprised as to how cold the US has turned out to be;

9). The Arabs on their part are facing a “security dilemma” of how contend Iran; they are not as hostile to Israel (Jordan. Oman, UAE) they realise the strategic value of Israel and in all private conversations they are cordial with the Israelis ( I am told by the Israelis that even the Saudis have toned down their anti-Israeli stand a bit since the Iranian threat is rising; although their anti-Israeli hatred is unabated. Nuclear power is viewed with fear after the Japanese Fukushima crisis; but the Iranians are all in full steam not mindful of their seismic sensitivities in their land;

10). Growing role of Pakistan in the region; even as India is experiencing a new round of bomb blasts in Mumbai and the fact is that Pakistan is now poised to overtake Great Britain in raising the number of active nuclear warheads stockpile to above 200 warheads (Israel is officially known to have 200 nuclear warheads; but by other estimates they have 400+) Pakistan’s nuclear arsenal is now being targeted by the radicals even as the country is now under enormous political-sectarian and economic turbulence;

The region and its mood irrevocably is sliding to a confrontation mindset by rhetoric; whose shrill acrimony may see missiles flying.