Arab Spring has Sprung; And Iranians to be Struck! 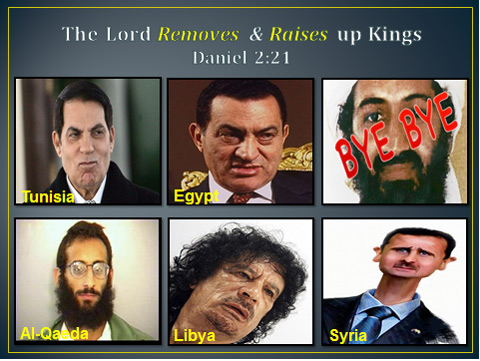 “GOD HAS PLANS FOR ISRAEL, AND IRAN AND THE ARABS ARE POKING HIM IN THE EYE, AND PROVOKING HIM TO ANGER,” says Bill Salus on “Light for Souls Radio.”

In this informative two hour blog-talk radio broadcast, Bill points out that the prophet Zechariah declares Israel is the apple of God’s eye, and points out that the Lord is tired of being poked in the eye by the Arabs and Iranians. Although God so loved the world He sent Jesus to die for the sins of mankind, Bill reminds that the Lord has century old foreign policy in place that promises to curse those that curse Israel!

Contrary to liberal pundit beliefs that democracy is overtaking the Middle East, Bill reminds that current revolts, rumors of war, and regime changes in the region draw attention to Daniel 2:21. Daniel says the Lord removes and raises up kings.

The toppling of Tunisian president Zine El Bidine Ben Ali, followed by the ouster of Egypt’s president Mubarak, shadowed by the assassinations of Al-Qaeda leaders Osama Bin Laden and Anwar al-awlaki, and Libyan president Muammar Gaddafi, leads Bill to believe 2012 could be THE YEAR OF RECKONING in the HOLY LAND. “IT’S OUT OF THE POOL TIME IN THE MIDEAST,” he declares!

On this insightful show Bill answers caller questions about the double jeopardy of Iran. He explains that Iran is involved in dual end time’s prophecies, and one of them may predict a STRIKE upon its NUCLEAR SITES. Moreover, he discusses what’s really behind the Arab Spring, and what will likely be its final outcome.

Then the discussion turns toward Damascus. Will Syria’s capital be destroyed, and if so how, and when?