Does Ancient Catholic Prophecy Suggest the End is Near? 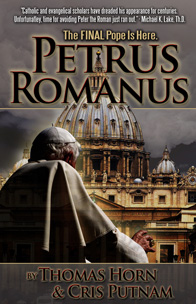 In this installment of Prophecy Update Radio, host Bill Salus takes a look at the end time’s role of Roman Catholicism in Bible prophecy. Bill interviews Cris Putnam, the co-author with Tom Horn of the bestselling book called Petrus Romanus. This timely and fascinating interview takes a close look at the world religion of the last days, and its potential ties to Catholicism.

Why didn’t the Vatican acknowledge the nation of Israel until the year of the Oslo Accords in 1993? In fulfillment of numerous Bible prophecies, Israel was rebirthed forty – five years prior to this official Vatican recognition. Why did this acknowledgement take over four decades to announce? What were the reigning Pope’s during that span of time waiting for?

Could the answer be summed up in the fact that Catholicism adheres to Replacement Theology? Catholic eschatology teaches that the Catholic Church, rather than Israel is the woman under persecution by Satan in Revelation 12. Pope John Paul ll, in his 1995 encyclical The Gospel of Life, stated that the Blessed Virgin Mary is the “woman clothed with the sun” in Revelation 12:1. Most prophecy experts point out that this speaks of the nation of Israel and not the Catholic Church.

This interview points out the numerous similarities between the Catholic Church and the prophetic descriptions written by the apostle John in chapter 17 of the book of Revelation. Many Bible prophecy experts, like Tom Horn, Cris Putnam, Mike Gendron, Dave Hunt, Jim Tetlow, Brad Myers, and me believe that John was describing a whore, or a harlot, which is synonymous with idolatry from a spiritual standpoint.

John spoke about a literal city that reigns over the kings of the earth. He says it was a city sitting upon seven hills, which at the time was known by both pagan and Christian sources as the city of Rome. These clues in addition to the other details John included, strongly suggest that he was describing a future apostate religious system that would be headquartered in Rome.

Moreover, an ancient Catholic prophecy predicts there will be a final Pope. Some believe the next Pope might be him. His name could be Peter the Roman (Petrus Romanus). Could we be living in the final generation during the time of the final Pope? What are the prophetic implications of an ancient extra – biblical prophecy written by Saint Malachy?