Why Hatred Exists in the Middle East 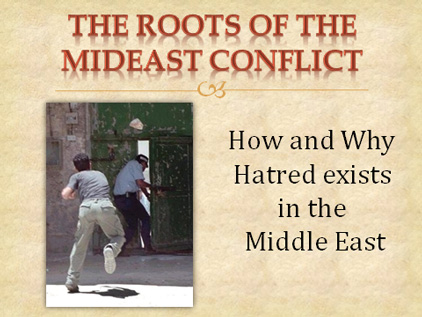 The time has come to blow the dust off of your household Bibles. There is no rhyme or reason as to what’s happening in the Middle East without having your Bible open in one hand and your favorite newspaper in the other.

The Middle East is observably on the verge of war. Israel is preparing to take military matters into their own hands; they have to it’s a matter of survival for the Jewish state.

But why? Why has it come to this lethal point? How come US presidents, and other world leaders can’t figure out how to resolve the longstanding Arab – Israeli conflict?

It’s because they don’t understand the historical roots driving the Mideast matters. The Bible informs of an Ancient Hatred that has plagued the region since time immemorial.

In this timely teaching video, Bill Salus lines up current Middle East events amidst a historical backdrop in order to better grasp what the future holds for the Holy Land.

Beginning with Egypt, the world’s most populated Arab state, and ending with the potential Israeli strike upon Iran’s nuclear program, Bill connects the prophetic dots from the past, with an eye on the future.

This teaching reminds that the present hostilities experienced in the Middle East between the Arabs and Jews can be traced to a disposition of hatred originating almost four thousand years ago. It was about that time that the Lord made an unconditional covenant with the Hebrew patriarch Abraham. Due to the inherent blessings contained within this covenant, the infamous Bible characters Hagar, Ishmael, Esau, Moab, Ammon, and Amalek (Esau’s grandson), coveted the rich contents of this covenant. These jealous individuals and their descendants that followed came to hate the Hebrews, who were the heirs of this blessed covenant.

Throughout time, the neighboring Gentile population of the region found it advantageous to embrace rather than resist this adversarial disposition. Ultimately it evolved into a cleverly conceived religious package giving it license to unleash itself in a holy war. The Jihad, as it is often labeled, presently underway in the Middle East, finds its justification in Islam, but its roots in this longstanding hatred.

Click the following link to watch the presentation was given at Calvary Chapel San Jacinto on the evening of August 5, 2012.