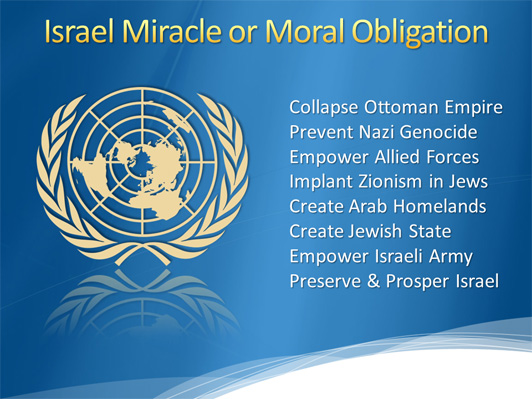 Recently I was asked by my friend Dr. David Reagan, “What do you consider to be the single most important sign of the times, and why?” My response was that the super-sign of the end times is the existence of the nation of Israel, and this was pointed out by Christ in Matthew 24:32-34 in the parable of the fig tree. Through the parable He taught that some future generation would be able to claim that the long list of prophecies predicted in Matthew 24 had found fulfillment. By instructing His disciples to “learn” the parable, which identified the reestablished nation of Israel through a familiar Old Testament typology of the fig tree, Christ elevated this prophecy to the forefront of all the last day’s prophecies He discussed.

Israel, that tiny Jewish state that is surrounded by hostile Arab neighbors, and that is about to go toe-to-toe with Iran to prevent the rogue state from developing nuclear weapons, is the super-sign of the end time’s, and yet many within the Christian Church today believe the existence of Israel is nothing more than the moral obligation of the United Nations in the aftermath of the Nazi Holocaust.

When it comes to the question of the significance of Israel in these last days who should we believe, Jesus Christ, or the super-sessionist theologian that believes the Christian Church has replaced Israel as the apple of God’s eye? (Zechariah 2:8).

Set aside the fact that the regathering of the Jews into the land of Israel today fulfills Bible prophecies found in Ezekiel 36:22-24, Isaiah 11:11, Ezekiel 37:12-13, Ezekiel 38:8, and a plethora of additional ones elsewhere in the scriptures, what about the fact that at least eight modern-day miracles occurred to ensure that Israel not only became a nation, but will become an even greater one soon.

In fact, in this author’s estimation, Israel’s existence today is a greater miracle than the parting of the Red Sea during the Hebrew exodus from Egypt, for the eight reasons listed below. Remember in the Exodus story Pharaoh of Egypt had Moses and every last Hebrew backed up against the Red Sea. The Hebrews were sitting ducks for Pharaohs soldiers. All the Lord had to do was four rather than eight things. The Lord had to;

1) Upset the Egyptians (harden their hearts) so that their deeply-rooted hatred of the Hebrews would get the best of them (Exodus 14:17),

2) Provide an escape route through which Moses and the Hebrews could flee (Exodus 14:21-22),

3) Create some distance between the advancing armies and the Hebrew refugees (Exodus 14:24),

4) And lastly, hobble the Egyptians chariots so they would be unable to escape the collapsing waters of the Red Sea (Exodus 14:25).

And, of course the Lord had to collapse the waters upon the Egyptian army in Exodus 14:26-28, to protect the Jews from future Egyptian attacks, and to demonstrate that the Gentile foreign policy of Genesis 12:3 was still effectually intact. But in reality, how difficult for the Lord could collapsing the waters be, considering the harder miracle was separating them in the first place? Genesis 12:3 promised cursings of a like-kind to them that cursed Israel. The Egyptians wanted to kill the Hebrews at the Red Sea, so in retaliation, they wound up dead under the waters of the Red Sea.

In contrast to the four miracles at the time of the Hebrew Exodus, the following are reasons that are explained in my recent book called Revelation Road, Hope Beyond the Horizon that evidence Israel today is an even greater miracle. In order for the nation of Israel to exist today, the Lord had to;

1) Conquer the Ottoman Empire, which ruled over the Mideast from 1517 to 1917. This occurred during World War I, when the Entente Powers of Russia, France, and the UK defeated the Central Powers consisting of the Ottoman, German, and Hungarian empires,

2) Create a Zionistic inclination in Jews scattered worldwide. This began in the late nineteenth century, around the time Theodor Herzl published his book Der Judenstaat, the Jewish State in German in 1896,

3) Defeat the Nazi regime which attempted Jewish genocide in order to prevent the return of the Jews to their ancient homeland of Israel,

4) Unite and empower the Allied Forces of the British Empire, the Union of Soviet Socialist Republic and the United States of America to stop Hitler’s holocaust attempt,

6) Move the United Nations to legislate and approve the “Partition Plan of 1947,” which called for the reestablishment of the Jewish State, so Jews could have their homeland restored,

7) Create and empower the Israel Defense Forces so that the Jews could survive Arab attempts in 1948, 1967, and 1973 to destroy the reestablished Jewish State,

8) Preserve and prosper Israel, since the future Israel described in Ezekiel 38:8 – 13 turns out to be a very secure and prosperous Israel.

None of these above eight feats could have been accomplished singlehandedly by the United Nations. They all required the Lord’s divine providence in order for the Jewish State to exist and survive today.

So in short, it appears that God meant what He said in Jeremiah 31, and the existence of Israel today against all odds, is proof in the prophetic pudding that the Lord says what He means.

………………..
Wikipedia definition accessed on the Internet on 6/22/11 at this link: http://en.wikipedia.org/wiki/Supersessionism