New Revelation “Greater Israel” on the Road Ahead! 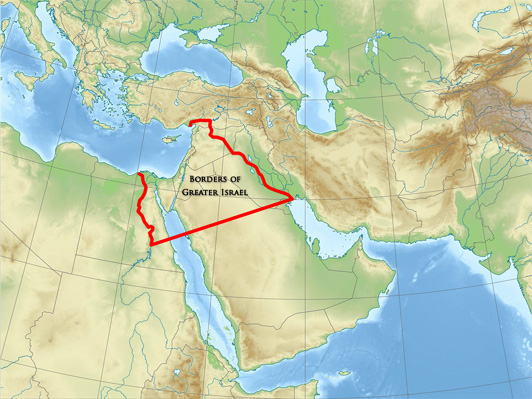 The international community is pressing Israel to forfeit HUGE CHUNKS OF PROMISED LAND, but author Bill Salus believes that ISRAEL IS GOING TO GROW, rather than shrink in the near future. “A GREATER, SAFER, MORE PROSPEROUS JEWISH STATE IS COMING SOON,” he proclaims on this fascinating one-hour radio program with host Dr. Bill Deagle.

CLICK HERE to listen to this prophetically insightful radio program.

The following paragraphs are excerpts from Bill’s brand new book called Revelation Road, Hope Beyond the Horizon that explain how Israel is about to annex more territory.

About 4,000 years ago, recorded in Genesis 15, the Lord promised Abraham an enormous amount of land. This land extended from the Nile River in Egypt to the Euphrates in modern-day Iraq and Syria. Through his son Isaac, rather than Ishmael, and through his grandson Jacob instead of Esau, the Promised Land became the heritage of the Israelites. Jacob was renamed Israel in Genesis 32:28 and 35:10. Thus, the Israelites, or Jews today, are named after their patriarch Jacob / Israel.

After the 400 years of exile elapsed and the exodus of the Hebrews out of Egypt ensued, Joshua brought the Israelites into some of the Promised Land. Finally, Abraham’s descendants were annexing some of the precious Promised Land. The division of the land is described in the book of Joshua chapters 13-21. At the time, the Israelites possessed more land than their modern-day equivalents.

About 500 years later, around 3,000 BC, King David and subsequently his son King Solomon, expanded into an even greater Israel. For the first time, Israel annexed lands to the northeast extending to the River Euphrates in Syria, as promised in Genesis 15:18. Unfortunately, King Solomon’s reign was followed by “two bums…,” as eschatologist Jacob Prasch humors; Rehoboam (Rehobum) and Jeroboam (Jerobum). Their struggle for power split the Israelite kingdom in two. Rehoboam was Solomon’s son, but Jeroboam was not kin to the king; Solomon appointed him to be the superintendent over his vast labor forces. Jeroboam used this position of authority to gain support for eventual quest for rulership over Israel.

The Jews began returning to their homeland over a period of time after the Babylonian captivity, but they never grew back into the landmass Solomon previously possessed. Then in 70 AD, the Romans conquered Israel, sacked Jerusalem, and destroyed the second Jewish temple. The Romans brought down the Jewish rebellion at that time, and in 135 AD they defeated the final rebellion, led by Bar Kokhba, and renamed the land of Israel, to Palestine. As a result of these events the Jews entered into centuries of Diaspora.

Revelation Road, Hope Beyond the Horizon explains how ISRAEL soon becomes a SAFER, GREATER, and more PROSPEROUS Jewish state. The biblical evidence for this is written in the sub-section of commentary called “Israel Expands Territorially Into Arab Lands,” in chapter 14 called “Greater Israel makes Plans for a third temple.”

Someday, the Jews will occupy all of the territory defined in Genesis 15:18. But when? Many eschatologists believe the full spectrum of the land will be deeded over to the faithful Jewish remnant upon the return of Christ during the 1,000- year messianic kingdom period. However, I believe Scripture supports the premise that some of the land will be captured by the IDF, prior to the second coming of Jesus Christ.

The Promised Land includes parts of Jordan, the Gaza Strip and the West Bank, and portions of Egypt, Saudi Arabia, Lebanon, Syria, and Iraq. Coincidentally, all of these Arab populations are listed in the Psalm 83:6-8 confederacy that someday seeks to destroy the Jews and rob them of their homeland. As pointed out in “Israel’s Exceedingly Great Army,” chapter six of Isralestine, the IDF wins this war. Subsequently, like they did during the time of Joshua, King David, and in June of 1967, the Jews will probably repeat the pattern of capturing portions of conquered Promised Land.