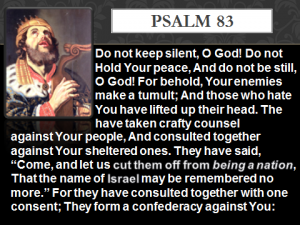 Article transposed from the commentary of Revelation Road, Hope Beyond the Horizon.

There are three main trains of thought concerning the potential for Psalm 83 Israeli war casualties. These possibilities are;

In part one (click here) the first was explored, and here in part two the second and third will be exposited upon.

The Israel of Ezekiel 36 mitigates Israeli casualties in Psalm 83.

The second train of thought, subscribing to a lack of casualties in Psalm 83, is best articulated by Gary Fisher of Lion of Judah Ministry. I had the fortunate opportunity of interviewing Gary on the Prophecy Update Radio Show for KWBB, when we were together at a prophecy conference in Dallas, in December of 2010. Our timely interview entitled “The Ezekiel 35-39 Mideast War Prophecies” can be heard in 4-parts here.

About midway through part – two of the interview, Gary suggests that the Lord is going to supernaturally judge the ancient Arab hatred spoken about in Ezekiel 35, and that Israel might not even fire a shot in the Psalm 83 war. He finds clear connections between Psalm 83 and Ezekiel 35–36, and believes that the passage below describes the Arab hatred of Israel that exists today. (Also read “Ezekiel 35, the Arab-Israeli War before Ezekiel 38“). Futhermore, Fisher believes, as do I, “in the time of the iniquity of the end” alluded to in this passage below finds correlation with these end times.

“Because thou hast had a perpetual enmity [ancient hatred], and hast given over the children of Israel to the power of the sword in the time of their calamity, in the time of the iniquity of the end; therefore, as I live, saith the Lord Jehovah, I will prepare thee unto blood, and blood shall pursue thee: since thou hast not hated blood, therefore blood shall pursue thee.”(Ezekiel 35:5-6, ASV; emphasis added)

Fisher also states, “I see some miraculous judgment on those (Arabs) that are intent on destroying Israel.” Then he quotes Ezekiel below to encourage the possibility that Israel might survive the Psalm 83 conflict relatively unscathed.

“But ye, O mountains of Israel, ye shall shoot forth your branches, and yield your fruit to my people Israel; for they are at hand to come. For, behold, I am for you, and I will turn unto you, and ye shall be tilled and sown; and I will multiply men upon you, all the house of Israel, even all of it; and the cities shall be inhabited, and the waste places shall be builded; and I will multiply upon you man and beast; and they shall increase and be fruitful; and I will cause you to be inhabited after your former estate, and will do better unto you than at your beginnings: and
ye shall know that I am Jehovah.” (Ezekiel 36:8-11, ASV)

In summary, Fisher suggests that Ezekiel 36 pictures Israel as a blessed and bountiful nation after Psalm 83, suggesting that Israel may not be hit very hard by the Arabs during the Psalm war.

I believe Fisher is correct to connect parts of Ezekiel 35 and 36 with Psalm 83, and hope he’s correct in his optimistic assessment of minimal Israeli casualties. Fortunately, during the interview, he left open the possibility that Israel may fire shots at their Arab enemies in Psalm 83, because I think it’s clear from prophecy that they will. According to my extensive research on Psalm 83, it appears that the IDF is the military tool utilized by the Lord to defeat the Psalm 83 Arab confederacy. Refer to the following articles linked below to understand the probable IDF role in Psalm 83.

• Is Ezekiel’s Army About to Face Off with the Arabs?
• Divine Vengeance—The Israel Defense Forces in Bible Prophecy.
• Ezekiel: Israel’s Dry Bones Can Fight.

Moreover, an exhaustive exposition of today’s IDF in Bible prophecy is written in the “Exceedingly Great Army” chapter inside my book Isralestine, The Ancient Blueprints of the Future Middle East.

Some eschatologists, including me, connect Isaiah 17 with Psalm 83. Isaiah predicts the destruction of Damascus. Damascus is the oldest continuously inhabited city in recorded history, dating back 4,000 years, to the time of Father Abraham. It’s Syria’s capital, with about four million people in and around the city. Syria appears to take part in Psalm 83 under the banner of Assyria. Therefore, the destruction of Damascus could certainly occur during, or within close proximity of, the fulfillment of Psalm 83.

At the time Psalm 83 was written about 3,000 years ago, Assyria comprised modern-day northern Syria, and northern Iraq. In 1,150 BC, Assyria began invading Syria (ancient Aram). The first Assyrian king to mention Carchemish is Tiglath-pileser I (circa 1,268 BC), who states that he plundered “from the neighborhood of the land of Suhu (the Shuhites) as far as Carchemish of the land of Hattu” in one day.(i) Carchemish was an ancient capital of the Hittites, located on the west bank of the Euphrates in northern Syria.(ii)

Approximately 1,000 BC, Assyria defeated the Hittites,(iii) enabling them to seize portions of modern day northern Syria. At that time, Damascus was located in the southern section of ancient Aram. Aram generally comprised much of what is now modern-day southern Syria. Because Aram is not listed in Psalm 83, it is possible that the destruction of Damascus predicted in Isaiah 17:1, occurs apart from the Psalm war. I believe the destruction of Damascus is either a precursor, or a part of Psalm 83. If Isaiah 17 occupies at least a peripheral part of the Psalm 83 scenario, then Israel could suffer severely according to what Isaiah 17:4 declares below.

“In that day it shall come to pass That the glory of Jacob [Israel] will wane, And the fatness of his flesh grow lean.” (Isaiah 17:4).

This verse portrays Israel in a dire condition. The expressions “the glory of Jacob will wane,” and “the fatness of his flesh grow lean” are self-explanatory. Israel becomes war-torn, “in that day,” alluding to the day of Damascus’s destruction. Israel’s lean condition seems to be the result of a serious conflict between Israel and Syria, in which Syria suffers the most damage.

According to the passages below, it appears as though Israel is responsible for the destruction of Damascus, and that the city is reduced to rubble overnight, well within a 24-hour period.

“In that day his [Damascus’s] strong cities will be as a forsaken bough And an uppermost branch, Which they left because of the children of Israel; [IDF] And there will be desolation.” (Isaiah 17:9).

“At evening time, behold, terror! Before morning, they [Damascus and its strong cities] are no more! This is the portion of those who despoil us, [Israel] and the lot of those who plunder us.” (Isaiah 17:14, RSV).
………………..
(i) Internet accessed on 6/16/2011 at this link: http://topicalBible.org/c/carchemish.htm
(ii) Parsons Bible Atlas under Carchemish.
(iii)International Standard Bible Encyclopedia states this under “Assyrian Invasions section 8”. “Soldiers of the Hatti had seized the cities of Sumasti (probably Samosata), but the Assyrian conqueror made his soldiers swim the Euphrates on skin bags, and so attacked “Carchemish of the land of the Hittites.”