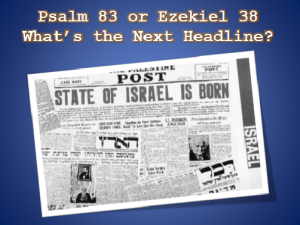 This article is a continuation of an Internet interview concerning the interpretation, and timing of Psalm 83. Moreover, it addresses several important details about the Gog of Magog invasion described in Ezekiel 38. Part one, entitled Psalm 83 What IT IS, and What it IS NOT, can be read here.

This segment addresses events surrounding the timing and motivation of Ezekiel 38, and the potential disposition of America, and the West throughout. Additionally, the time span between Psalm 83 and Ezekiel 38 is looked at.

ANSWER: Smaller conflicts could still precede the climactic concluding Psalm 83 war; there is precedent for that, like Operation Cast Lead in 2009, and the Israel – Hezbollah war of 2006. However, the stakes have risen dramatically due to the high-tech arsenals the Arabs have amassed, and the regional instability brought about by the Arab Spring of 2011.

My personal view is that Psalm 83 is merely an Arab missile launch away from igniting the granddaddy of all Mideast wars to date. I believe anything that happens of a warlike nature in the Fertile Crescent will lend itself to the commencement of Psalm 83. In my book Revelation Road, Hope Beyond the Horizon, I hypothesize a very possible scenario for how the Psalm war could be triggered.

QUESTION: As you know, the West (the U.S. and U.K.) is only briefly mentioned in the scriptures surrounding the War of Gog and Magog and only in the context that they ask Russia and Iran why they’re marching to war against Israel. They do nothing to help Israel. And neither America nor Britain is mentioned at all in the Psalm 83 War. As of this writing, in the third week of February 2012, America and Britain have left Iraq, freeing up many military troops and America is stationing its war ships in the Strait of Hormuz. Do you think that America/U.K. will be involved in the Psalm 83 War and if not, how would these two countries explain themselves to its people by not coming to the aid of one of their closest allies, Israel? What circumstances do you see that would prevent America and Britain from helping Israel?

ANSWER: Your question presumes that the Merchants of Tarshish, and all their young lions of Ezekiel 38:13 represents the UK and US. I tend to agree with this possibility; however there are others who believe it could represent Spain, and Central and South America. Presuming that it speaks of America, then your question is reasonable considering the fact that America has historically been a staunch ally of Israel.

First, I have no reason to believe that any other nations ally alongside Israel’s in Psalm 83. The prophetic text doesn’t support a coalition with Israel at the helm. The Judges examples alluded to earlier (part-one) pictured Israel going it alone against the Midianites and the Canaanites. For the most part, many of Israel’s past wars were fought single-handedly.

Second, if the war were to happen under the reign of the Obama administration, and it very well could, a plethora of excuses could be levied. Among them, is the fact that the country is virtually bankrupt and can’t afford to engage in another Mideast war. The US is withdrawing troops from the region rather than deploying them. Additionally, America can take the position that Israel acted unilaterally without US consent, and therefore; America will only be responsible for protecting its own interests at home and abroad.

Third, the rapture could occur before or during the Psalm 83 war and that would mitigate against America’s ability to engage in a major war.

QUESTION: Let’s talk about timing. How long would you anticipate the Psalm 83 War could last? What amount of time do you think might pass between the end of the Psalm 83 War and the beginning of the War of Gog and Magog? For both of these questions, do you foresee days, weeks, months or even longer?

ANSWER: Israel’s history evidences that the nation doesn’t fight long drawn-out protracted wars. One example of this was the six-day war in June of 1967. The present geo-political scenario suggests that approximately 200,000 missiles are aimed at Israel, including Scud D’s, and other varieties that can carry a chemical payload. This is why Israel has equipped millions of its residents with gas masks; and why the nation conducts frequent “Turning Point,” civilian defense drills.

The Psalm 83 war will most likely be a short war, because the Lord will honor Asaph’s petition to empower today’s IDF like was the case when Gideon fought the Midianites, and General Barak fought the Canaanites. (Judges 4-8) Also, Israel will have to act decisively and expeditiously in order to save Israeli lives. I suspect that the IDF will spare no fire power in this war, and that could imply a NUCLEAR WAR!

Concerning the time-lapse between Psalm 83 and Gog of Magog; I don’t suspect more than one to five years will separate these two wars of epic biblical proportion. I can’t imagine it being merely a period of a few days or weeks, because Israel will need some time to mop up the war mess, and process the POW’s. The nation will also need to do all that it takes to dwell securely without walls, bars, and gates. Moreover, the country will need to acquire the wealth that entices Russia to form its formidable coalition to invade Israel to capture its great plunder. All of the above will require some time.

However, on the flip side, Russia will want to harness the Islamic hatred that will be spreading rampantly within Iran, Turkey, Libya, and all the other Muslim nations of the coalition in the aftermath of Psalm 83.

The wild card that might dictate the time-lapse window is the rapture. Should this miraculous event occur shortly after Psalm 83 concludes; then Russia will have license to move without further restriction. This is because all of the Muslim hordes of its coalition will be kept intact, but the western armies will undoubtedly be reeling from loss of significant troops.

QUESTION: The Bible seems to indicate that the ‘Hook in the Jaw’ that brings Russia, Iran and other Islamic countries against Israel in the War of Gog and Magog is oil. There are many oil exploration companies working in Israel and off its coast that believe that there are massive oil reserves beneath the land and ocean and they are working as hard as they can to find it. Do you think that oil will be the deciding factor that will make Iran, Russia (and the others) move against Israel, or will oil be only one of the many factors as why they march on Israel?

Answer: I cover this scenario in great length in Revelation Road, Hope Beyond the Horizon, and would defer the answer to invite the reader to obtain a copy of this timely and extremely relevant book.

QUESTION: The leaders of Iran have stated publically many times why they want to attack Israel; to cause as much death and destruction as possible which in turn brings about their supposed messiah, The 12th Imam. And the majority of the Islamic countries and terrorist groups that surround Israel either buy into this belief, or just simply hate any non-Muslim group, especially Jews and Christians, so we know why they would attack Israel. But Russia, even given all of that country’s shortcomings, is not rooted in satanically inspired, fanatical, radical Islam, so why would they align themselves with such unadulterated hatred and go to war hand in hand with radical Islam? And secondly, since Russia seems to be rooted more in reality, and the Russian leadership may be crazy, but they’re not stupid, they must know of both the Psalm 83 War and War of Gog and Magog prophecies, so why would they participate in the Gog and Magog one, because they have to know how it ends for them; with their army very, very decimated?

ANSWER: Russia seeks to regain its Cold War super-power status. The countries post Soviet Union attempt at capitalism has failed. Communism is still the modus operandi of the Russian government. The communist country possesses the world’s largest oil reserves, and has recently become the largest exporter of oil. In addition, it is a major supplier of natural gas to Europe and elsewhere. Furthermore, the nation is one of the world’s largest exporters of military weapons and technologies. If any country, or countries can help them achieve their super-power aspirations, they become an immediate ally.

Additionally, Russia has a history of Anti-Semitism; the pogroms of the 1800’s and early 1900’s are clearly a case-in-point. In modern history Russia has been a strong supporter of Israel’s Arab and Persian enemies. The country has supplied Iran with nuclear fuel rods in the summer of 2010, and is about to supply Syria with the S-300 missile defense system and quantities of the nuclear-capable Iskander missiles. Russia has demonstrated a genuine disregard for Israel’s well-being since its rebirth as a nation in 1948. It is probably for these reasons that the Lord puts hooks in Russia’s Jaws to turn its attention toward Israel great prosperity.

Ezekiel 38:16 – 39:6 evidences that the Lord will personally, and divinely, make a humiliating spectacle of Russia for all of its antagonism toward Israel. Ezekiel 39:7 informs that the Lord chooses the occasion to put the nations of the world on official notice that He is the covenant keeping God of Abraham, Isaac, and Jacob!

It’s questionable as to whether Gog, the Russian leader, knows about Psalm 83 and Ezekiel 38 beforehand. If he does, he obviously puts no stock in those prophecies. Being either unaware of, or giving no credence to these prophecies, he allows his greed and quest for power get the best of him.