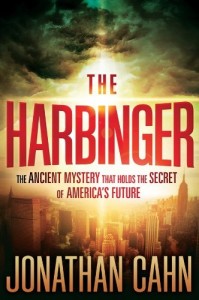 IS IT POSSIBLE – That there exists an ancient mystery that holds the secret of America’s future? That this mystery is behind everything from 9/11 to the collapse of the global economy? That God is now sending a prophetic message on which America’s future hangs?

Jonathan Cahn the author of the recently released bestselling book, “The Harbinger”, believes the answer is YES! On this two-part edition of Prophecy Update Radio Bill Salus and Jonathan Cahn discuss the warning signs that Americans should be closely watching and preparing for.

There are nine harbingers that indicate the future of the United States hangs in the balance. A harbinger is something, or someone that presages or foreshadows what is to come. In this timely interview Jonathan points out how historical prophecies contained in the book of Isaiah find application in America today.

Purchase Jonathan’s book, The Harbinger the Ancient Mystery that holds the Secret of America’s Future here.