Biblical doom of Damascus ‘right before our eyes’ 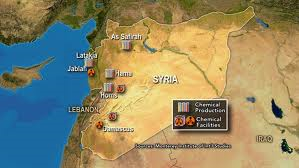 In a recent front page article linked HERE, World Net Daily featured the Psalm 83 – Missing Prophecy Revealed, How Israel Becomes the Next Mideast Superpower DVD and book. The author of the article entitled the “Biblical doom of Damascus ‘right before our eyes’ included the quote below.

“The ancient Hebrew prophecy contained in Isaiah 17 is presently poised to find final fulfillment, and it could easily be provoked by a poorly calculated political move by America,” claims Bill Salus, author of “Psalm 83: The Missing Prophecy Revealed.” “Current contemplations of the Obama administration to strategically strike Syria to punish the Assad regime for using chemical weapons on his Syrian countrymen could be the spark that sets the entire Mideast ablaze. President Assad has threatened to attack Tel Aviv on several occasions during the Syrian revolution, and his latest threats have prompted Israelis to scramble for gas masks.

“In tandem a prophecy in Psalm 83 predicts that a climactic concluding Arab-Israeli war is coming, and Syria and Israel are listed among the participants,” Salus told WND. “It is reasonable to presume that we are living in the days of Isaiah 17 and Psalm 83, and that a single U.S. missile landing anywhere in Syria could provoke the ‘Mother of All Mideast Wars’ that is predicted in the Scriptures!”

IMPORTANT CAVEAT concerning the WND article. The author includes information about the possibility of a coming Islamic Antichrist, which Bill Salus firmly argues against. Bill believes that Psalm 83 will be a punch to the gut of Islam and that Ezekiel 38 will be an uppercut to the Jawbone. He believes that these are both Pre-Tribulation events, and that as a result Islam will be knocked down to the canvas for the ten count when the Tribulation Period commences, or shortly thereafter. Thus, Islam will likely not be fore-fronting some charismatic Muslim Antichrist in his estimation.