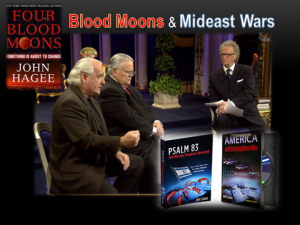 You are invited to watch a PowerPoint teaching presentation that was preached on December 8, 2013 by Bill Salus at Calvary Chapel Central Bucks, Pennsylvania.

This 47 minute video is packed with prophetic information that should cause Christians to seek vigorously to redeem the time. If the coming blood red moons occurring on the holy feast days of Passover (April 15, 2014), Tabernacles (October 8, 2104), Passover (April 4, 2014) and Tabernacles (September 28, 2015) are significant, then time is of the utmost essence.

Bill points out the potential connection between the past three tetrad sequences of four blood red moons on the same holy feast days in 1493-1494, 1949-1950, and 1967-1968, and the coming tetrad on the feast days afore mentioned.

The Jews were put under severe unjustified Gentile persecution. They were divinely preserved through that tragic episode, and they were triumphant and in receipt of a safe land haven in the aftermath. Thus, on the feast days of the tetrads they were thanking their God for their existence and safe haven of worship.

Discover what this all meant and may mean with the Psalm 83 war and the coming four blood red moons. Also, identify what all this means for America. The USA did not become a superpower nation because of our granddaddies good looks, rather much is required of this country. Are we doomed, or is there still hope for this nation?

Important Caveat: Between the 40 – 42 minute mark on the teaching Bill discusses Luke 21:24-28 in the context of Christ coming for His church in the Rapture. However, these passages could instead refer to the Second Coming of Christ, rather than the Rapture. Regardless, believers today that will be Raptured prior to the Tribulation Period, and those who become believers during the Tribulation Period, should find consolation in the fact that Christ will ultimately redeem all who in believe in Him.

Click HERE to purchase the DVD called America and the Coming Mideast Wars.