Is Psalm 83 a Great Tribulation Event? 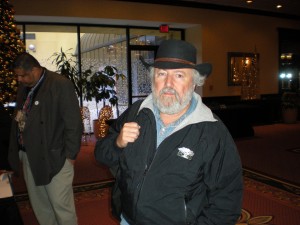 In December of 2009, while attending a Pre-Trib Rapture conference hosted by Dr. Tim LaHaye and Dr. Thomas Ice, I had the opportunity to interview the highly regarded prophecy expert, Dr. Arnold Fruchtenbaum, (pictured here) for Prophecy Update Radio.

We talked about several prophetic topics, but of particular interest was our discussion centered upon the timing of Psalm 83. Many of you interested in the Psalm and its timing may find his comments below fascinating.

Knowing that Dr. Fruchtenbaum has a healthy aversion to date setting and newspaper exegesis, I was respectfully careful in our interview not to corner him into pinpointing the exact timing of the fulfillment of the Psalm event. However with that said, I’m very familiar with his general viewpoint regarding the final fulfillment of the prophecy. Arnold and I have bantered back and forth on the event timing on numerous occasions. I believe it is a Pre-Trib event, and Arnold has tended to place the final conclusion of the event into the “Great Tribulation”, which would be the second half of the seven year tribulation period.[i]

Let me give you some background on this friendly decade old timing debate we embarked upon. Please note that his teachings have mentored me throughout most of my Christian walk. I have listened to a majority of his teaching tapes and read his Footsteps of the Messiah and Israelology books with great interest.

Regarding his placement of the Psalm in the Great Tribulation, I first discovered his viewpoint in his Footsteps of the Messiah book, where he clearly places the final fulfillment of the event in the Great Tribulation. At a luncheon together, I seized the opportunity to ask him why he believed this. He opened up his Bible to Obadiah 1:15 and read:

“For the day of Jehovah is near upon all the nations: as thou hast done, it shall be done unto thee; thy dealing shall return upon thine own head.” (ASV).

He and I both concur this passage alludes to the timing of the fulfillment of Psalm 83; however, where we differ in opinion is that he believes the passage mandates that the event conclusion occurs in the day of Jehovah, and I read the passage as it occurs when the day of the LORD (Jehovah) draws near. The text says; “For the day of Jehovah is near”, which implies that the day of the LORD will occur subsequent to the fulfillment of Obadiah 1:15. We both believe that the day of Jehovah encompasses at least the second three and one-half years of the Tribulation, and quite possibly the entire seven year period. Therefore, I suggest Psalm 83 occurs when the Tribulation period is relatively soon to happen, but not yet come.

A few friendly face to face meetings later, Arnold suggested that I write a book about the subject, which is now published and is called Isralestine, The Ancient Blueprints of the Future Middle East. (ii) Although he believes we are in “substantial agreement” and Isralestine presents “valid arguments” on the details of the Psalm, he had remained fairly steadfast in his contrasting view of the timing of Psalm 83. Since the time of this interview, I have released and even more comprehensive book on Psalm 83, called Psalm 83 – The Missing Prophecy Revealed, How Israel Becomes the Next Mideast Superpower.
………………………………………….. 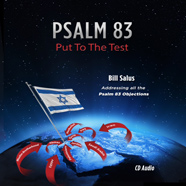 NEW PRODUCT AVAILABLE HERE – Psalm 83 Put to the Test. A CD audio that answers all the tough questions about Psalm 83.

2.) Was the Prophecy already fulfilled?

Since the publishing of Isralestine our communications continued through radio interviews together, speaking at conferences with each other, and volleys of emails back and forth. His general feeling up to the time of the December, 2009 interview was that partial fulfillment of Psalm 83 occurred in the wars of 1948 and 1967, however final fulfillment has not yet occurred.

Here is where this article takes an interesting twist. In our interview together Dr. Fruchtenbaum answers several of my semi-pointed questions in a way that suggests he is open to other views of the final timing of Psalm 83. Dr. Fructhenbaum believes the majority of Psalm 83 finds fulfillment before the seven year Tribulation Period occurs, meaning more segments of Psalm 83 may yet occur as Pre-Trib events.

Concerning God’s manner of dealing with the Psalm 83 Arab confederacy, he “definitely” believes, as do I, that the Israeli Defense Forces (I.D.F.) will become divinely empowered to conquer these confederates as per Obadiah 1:18, Ezekiel 25:14, and elsewhere. We both believe that Asaph petitions God for this type of I.D.F. empowerment in Psalm 83:9-11.

Then I asked Arnold a multi-layered question: first, if Israel is dwelling in a condition of peace guaranteed by the false covenant with the Antichrist[iii] in the first half of the tribulation, how could Psalm 83 occur, and second if Israelis are fleeing from the genocidal campaign of the Antichrist in the second half of the Tribulation, likewise, how could Psalm 83 occur? His comments can be summarized as follows:

“First, the purpose of the false covenant is to guarantee Israel’s military security and, therefore, the I.D.F. will not likely be very active during the first three and one-half years of the Tribulation period. Thus when the “Abomination of Desolation” occurs at the midpoint of the Trib period, the I.D.F. won’t be ready to “tackle it”.

“Second, the Jews will be fleeing from the Antichrist rampage during the second three and one-half years of the “Great Tribulation” and thus they won’t likely be stopping in mid-flight to conquer the Psalm 83 confederates.”

Therefore, I pointedly asked him, then how can Psalm 83 find final fulfillment during the seven year Tribulation period? He said, “That’s why I believe the majority of Psalm 83 occurs Pre-Trib; before the actual tribulation”.

Wow! So what do you make of that? It sounds like he may be leaning toward a complete fulfillment, or at least a majority fulfillment, of Psalm 83 as a Pre-Trib event.

This article is revised from an earlier article. The earlier article contained numerous interesting blog comments. You can read the article and comments by clicking HERE.
…………………..
[i] Footsteps of Messiah Chapter 20, section C, pages 498-499
[ii] Fruchtenbaum invited me to be part of a panel for his filming of his DVD, “Why is God still saving Gentiles” available at http://www.ariel.org/. It was after this filming over refreshments that he suggested that I write Isralestine.
[iii] Daniel 9:27 and Isaiah 28:18, 18