This 4-part study comes from the Chapter called Obadiah’s Mysterious Vision in my book called Psalm 83 – The Missing Prophecy Revealed, How Israel Becomes the Next Mideast Superpower.

Onward with Obadiah’s Vision – Part 4 This study looks at Obadiah 1:15-21 (all footnotes are included in the Psalm 83 book).

“For the day of the LORD upon all the nations is near; As you have done, it shall be done to you; Your reprisal shall return upon your own head.” (Obad. 1:15, NKJV).

The curse-for-curse-in-kind reprisal against Edom will occur before “the Day of the LORD” occurs; it occurs when “the day of the LORD upon all the nations is near.” “The day of the LORD” is defined by most as either the entire seven-year period of the tribulation (i.e., Daniels seventieth-week), or only the second half of that period, spanning 3.5 years.

“For as you drank on My holy mountain, So shall all the nations drink continually; Yes, they shall drink, and swallow, And they shall be as though they had never been.” (Obad. 1:16, NKJV; emphasis added)

To “drink,” “swallow,” and “be as though they had never been,” finds association with biblical illustrations of judgment. The picture is that of a people being forcibly handed a cup containing a poisonous content. God, insuring that the intended recipients will not possess the antidote, personally conjures up this highly toxic concoction. The affected population group has done something that has greatly disturbed God, and as such has provoked upon them a divine judgment. Pertinent examples to this study can be found in Jeremiah 25:17–26, and Jeremiah 49:12.

The judgment to befall Edom will serve as a precursor to the judgment within “the day of the LORD upon all the nations.” Zephaniah 2 also makes clear that this judgment against Edom, which will also extend further into the other confederate member nations, is to serve as an example to the other nations, but more importantly it is a call to the “meek of the Earth” to get right before “the day of the LORD” occurs.

“Gather yourselves together, yes, gather together, O undesirable nation [Israel today in unbelief, gathering in the land], Before the decree is issued, Or the day passes like chaff, Before the LORD’S fierce anger comes upon you, Before the day of the LORD’S anger comes upon you! Seek the LORD, all you meek of the Earth, Who have upheld His justice. Seek righteousness, seek humility. It may be that you will be hidden In the day of the LORD’S anger.” (Zeph. 2:1–3, NKJV, emphasis added)

Zephaniah 2 goes on to describe the conditions subsequent to the Israeli Conquest of the Psalm 83 confederacy. For more information on the details of Zephaniah 2, refer to the Psalm 83 and the Prophets chapter contained within my Psalm 83 book.

Though we are told in verse 16, that the Psalm 83 confederate nations first, and then the remaining nations at large in the world “shall be as though they had never been,” this will not be the case on Mount Zion! “On Mount Zion there shall be deliverance,” and holiness.

Obadiah encapsulates the theme scattered throughout his vision; I will bring you Palestinians down (Obad. 1:4), you will be cut off (Obad. 1:5), your treasures searched out (Obad. 1:6), a trap for you (Obad. 1:7), everyone will be cut off by slaughter (Obad. 1:9,) shame shall cover you (Obad. 1:10), the forced drinking from the cup of judgment (Obad. 1:16). Obadiah in (Obad. 1:18) determines the defeat of Esau’s descendants residing within the modern-day Palestinians will be at the hands of Israel’s exceedingly great army. The use of stubble, which when lit burns entirely, evidences the theme earlier presented of the severity of this judgment against Edom. 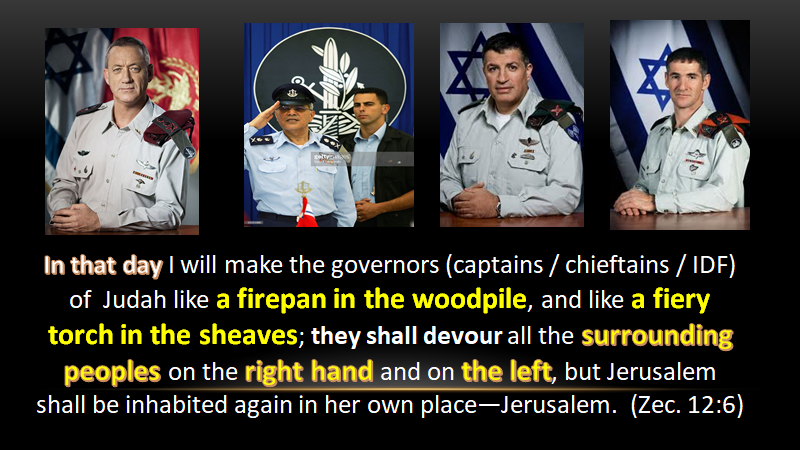 Zechariah 12, quoted below, provides more details about the lethal fate of Esau’s Edomite descendants and their Arab cohorts. Not only the Palestinians, but also the Arab states, “the surrounding peoples on the right hand and on the left” of Israel. This identifies the inner circle of nations and terrorist populations within them that form into the Psalm 83:5-8 confederacy. These Arabs are also reduced to stubble along with the Palestinians.

“Behold, I will make Jerusalem a cup of drunkenness to all the surrounding peoples, when they lay siege against Judah and Jerusalem.”… “In that day,” says the Lord, “I will strike every horse with confusion, and its rider with madness; I will open My eyes on the house of Judah, and will strike every horse of the peoples with blindness. And the governors of Judah shall say in their heart, ‘The inhabitants of Jerusalem are my strength in the Lord of hosts, their God.’ In that day I will make the governors of Judah like a firepan in the woodpile, and like a fiery torch in the sheaves; they shall devour (reduce to stubble) all the surrounding peoples on the right hand and on the left, but Jerusalem shall be inhabited again in her own place—Jerusalem.” (Zechariah 12:2, 4-6; emphasis added)

DOES ISRAEL HAVE ENEMIES ON THE RIGHT HAND AND ON THE LEFT? 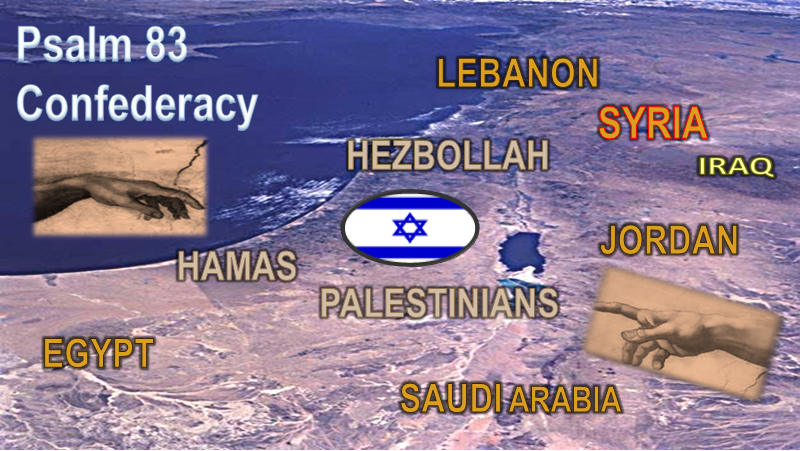 “For behold, Your enemies make a tumult; (on the right hand and on the left), And those who hate You have lifted up their head. They have taken crafty counsel against Your people, And consulted together against Your sheltered ones. They have said, “Come, and let us cut them off from being a nation, That the name of Israel may be remembered no more.” For they have consulted together with one consent; They form a confederacy against You: The tents of Edom (Palestinians) and the Ishmaelites (Saudis); Moab and the Hagrites (Hagarenes / Egyptians); Gebal (Lebanese), Ammon, and Amalek; Philistia (Hamas) with the inhabitants of Tyre (Hezbollah); Assyria (Syria and Iraq) also has joined with them; They have helped the children of Lot (Jordanians). Selah” (Psalm 83:2-8; modern-day names added).

Observe below the total contrast between Obadiah 1:17 blessing the descendants of Jacob, who is Israel, and Obadiah 1:18 cursing Esau’s Edomite descendants who mostly exist within the Palestinian peoples of today. Jacob will have descendants, but his twin brother’s blood line ends entirely as per Obadiah 1:18! 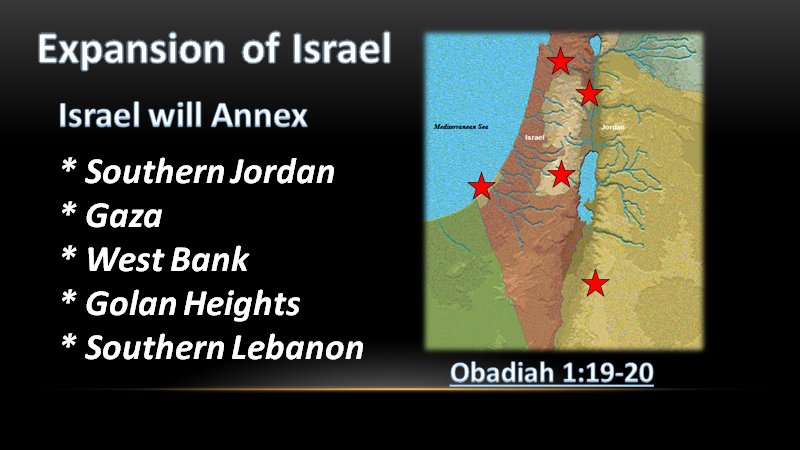 In essence, Obadiah 1:19–20 implies that as a direct result of the Jewish conquest over the Palestinians alluded to in Obadiah 1:18, Israel will be significantly increased in both size and prosperity. The tiny Israel as we recognize it today will soon encompass a major portion of the Middle East, and become one of the wealthiest nations in the world.

Then saviors [yasha] shall come to Mount Zion To judge the mountains of Esau, And the kingdom shall be the LORD’S. (Obad. 1:21, NKJV)

The Hebrew word yasha can mean deliverers, victors, avengers, or saviors. What Obadiah appears to be stating in verse 21a is that from Mount Zion, Jewish sovereignty will be exercised over the conquered territory of Edom. The phrase “the kingdom shall be the LORD’S” in v21b is a probable reference to the sovereignty over the region by the Jews, as they will be known at that future point once again as “My people Israel.” Ezekiel 25:14 addresses this conquest and refers to the Jews again as “My people Israel.”