A review of Psalm 83: The Missing Prophecy

Jim Fletcher is director of Prophecy Matters. The longtime editor for Master Books, the world’s largest publisher of creationism books, Jim now travels and speaks on the subject of apologetics. Incorporating his impressions gleaned from numerous trips to Israel, and with a keen eye on the culture, his talks are up-to-date and relevant. Jim writes for a variety of publications, including the Jerusalem Post, WorldNetDaily, OneNewsNow, and BeliefNet. He blogs weekly at the “Israel Watch” section of RaptureReady .

Things in the Middle East are, as they say, “heating up.” For those of us who have watched the region for many years, there is a sense that the pressure currently applied to Israel by the international community is perhaps the worst since the state was founded 65 years ago.

Political, diplomatic, cultural, and military pressure is so intense, one wonders how Israel can navigate such varied dangers. 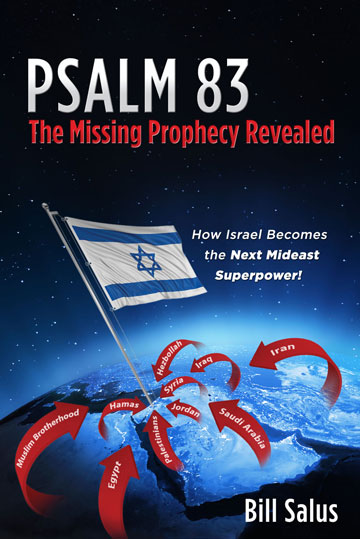 Into this environment steps one of the best Christian researchers and writers in the area of Bible prophecy I know: Bill Salus.

Bill burst onto the Bible prophecy scene a few years ago with the terrific Isralestine. He then added to his talent by writing Revelation Road, which presented in end-times scenarios in a novel form. I thought then as now that it was one of the best treatments of that genre that I’ve yet read—and that career stretches back 20 years.

History is proving that conditions ripe for Psalm 83 have never quite existed like they do now. The passage describes a coalition—a confederation—of Arab states immediately surrounding Israel. They wish to wipe the Jewish state from the map.

Some have taken issue with this interpretation, but it’s a matter of disagreement between friends and colleagues. I believe the framework of Psalm 83 fits nicely with the geopolitical scene we are witnessing today—driven by the so-called Palestinian narrative.

Frankly, I found Psalm 83: The Missing Prophecy, to be a riveting read, in no small part due to Bill’s exhaustive research. An example:

“Though Hosea 1:9–10 speaks of a time when Israel would be reclassified as “not My people,” this declassification did not find final fulfillment during Hosea’s time, whose ministry spanned from 750 to 725 BC. Rather, it was a prophecy of events to come. The title “My people Israel” continued to apply even during the time of the prophet Jeremiah, whose ministry began in the thirteenth year of Josiah (628 BC). They continued to hold the title even during the Babylonian captivity, evidenced by the fact that Daniel was still prophesying from within Babylon during that period.”

The thousands of hours he’s spent in research and writing are a huge boon for the reader and serious student of prophecy. This is what makes a new Bill Salus book such an anticipated event.

Psalm 83: The Missing Prophecy is an invaluable and indispensible addition to my personal prophecy library. The way Bill weaves current news with seemingly obscure Old Testament passages is breathtaking. In particular, the clear evidence that Psalm 83 is describing the “Arab Spring,” wed to the long-term plans of Arabists who invented “political Palestine” with which to one day finish-off Israel, is overwhelming. The very charter of Hamas sounds like a copy of Psalm 83!

Last—but really first in Bill’s thinking—is the use of Bible prophecy teaching to advance the Gospel. This is one of the things I appreciate most about his ministry and about the place his writing talents have taken him.

Rapture Ready Radio was one of the first radio shows to interview Bill about his new book Psalm 83 – The Missing Prophecy Revealed, How Israel Becomes the Next Mideast Superpower.

This interview was conducted during the Future Congress Prophecy Conference in Dallas on January 4-6, 2013.

Click HERE to listen to this important RADIO SHOW NOW.

In this timely interview Bill;

1.) Dispels the four primary arguments against Psalm 83 being an imminent threat to Israel,

2.) Demonstrates how the Arab Spring has burgeoned into an Anti-American Arab Apocalypse,

3.) Displays what Arab States and terrorists groups participate in the Psalm 83 prophecy,

4.) Discusses the crucial function of the Israeli Defense Forces within the Psalm 83 war,

6.) Describes the definite distinctions between Psalm 83 and Ezekiel 38,

7.) Defines the future borders of the NEW ISRAEL,

8.) Delivers a powerful message about the importance of Psalm 83 today!

Click HERE to learn more about Bill’s book Psalm 83 – The Missing Prophecy Revealed, How Israel Becomes the Next Mideast Superpower.

Click HERE to watch the numerous TV shows that have already featured the Psalm 83 book.

Click HERE to buy the Psalm 83 – The Missing Prophecy Revealed, How Israel Becomes the Next Mideast Superpower, book and DVD pack.