The Fallible Assumption of Mary 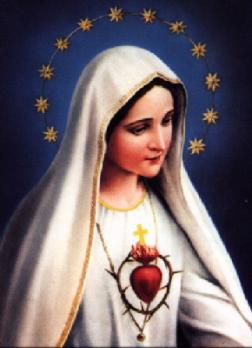 Some believe she has redemptive power, others suspect she is the demonic imposter called “Mother of Harlots” from the biblical book of Revelation; the Catholic “Virgin Mary,” why has she become one of the most controversial religious figures of our time?

While Iranian president Mahmoud Ahmadinejad is praying for the return of the Shiite Islamic Messiah called the Twelfth Imam, also called the Mahdi, Catholics by the millions continue to pilgrimage annually to Marian apparition sites scattered throughout various parts of the world. Even more pray to her daily for guidance and spiritual intercession.

Many Catholics, Orthodox, and others believe the apparition is Mary, the mother of Jesus, in the bible. Several of her supernatural sightings like, Our Lady of Guadalupe (Mexico City) in 1531, and Our Lady of Fatima (Portugal) in 1917 are officially accredited by the Roman Catholic Church.[i]

Click HERE to listen to Mike Gendron interview with Bill Salus called “Are Mary Apparitions and the Eucharistic Christ Biblical?’

WHAT IS HER EXTRA-BIBLICAL STORY IN A NUTSHELL?

On November 1, 1950, Pope Pius XII, exercising papal infallibility declared in “Munificentissimus Deus,” (most bountiful god) that the Assumption of Mary is a dogma of the Catholic Church. He announced, “That the Immaculate Mother of God, the ever Virgin Mary, having completed the course of her earthly life, was assumed body and soul into heavenly glory.”[ii]

As a dogma, the Assumption is a required belief of all Catholics; anyone who publicly dissents from the dogma, Pope Pius XII declared, “has fallen away completely from the divine and Catholic Faith.” His statement accuses “anyone” who believes Mary died rather than was assumed up into heaven while still living, is an apostate “fallen away completely” from the “divine” things pertaining to God.[iii]

Pope Pius XII declaration was made in direct correlation with the infallible statement issued ninety-six years earlier by Pope Pius IX in “Ineffabilis Deus,” (ineffable god). His predecessor’s statement pertained to the Immaculate Conception of the Virgin Mary.[iv] The prior Pope’s statement became the basis for Pope Pius XII Assumption of Mary dogma.

The Immaculate Heart of Mary, formerly called “The Sacred Heart of Mary,” probably finds its early beginnings around the time of St. Augustine who stated “Mary was not merely passive at the foot of the cross; “she cooperated through charity in the work of our redemption.”[v]

Similarly, even though Saint Epiphanius of salamis stated in AD 377 that no one knew whether Mary had died or not, apocryphal accounts of the Assumption of Mary have circulated since at least the 4th century.[vi]

It is generally understood that Pope Pius XII exercised his papal authority in this matter to connect the Immaculate Heart of Mary with her bodily assumption into heaven. After years of controversy, he was left only two options. He could connect the two events officially through dogma, or discredit all Catholic accredited Mary apparitions.

The argument points surrounding the dilemma Catholicism faced were as follows:

These above points are crucial considering several Catholic accredited Mary visionaries report the apparition has made both self-exalting and Co-redemptrix claims.

Thus, the only possible way for Pope Pius XII specifically, and Roman Catholicism generally, to override the above sound scriptural objections was to address them at their roots. Mary’s death needed to be disproven and her assumption to heaven validated. If this could be done then the immaculate nature of Mary’s heart could be substantiated.

Unfortunately, neither Pope Pius XII nor Pope Pius IX could provide such proof. However, Catholics are expected to accept papal infallibility in lieu of the need for proof in this matter. If the Vicar of Christ, the Pope in this case, exercises papal infallibility his interpretations of the scriptures are to be esteemed on even par with the Holy Scriptures themselves.

The inference to be understood by the Assumption of Mary dogma is that Mary was assumed directly into heaven avoiding death’s grip entirely, which she could only have done by having a sinless or immaculate heart. Thus, since she didn’t die but was assumed, she possesses an unrestricted right of random planetary return through apparitions, or whatever other means she chooses, throughout time.

The uninterrupted tradition of the Catholic Church feast celebrating the Assumption of Mary dates back at least to 549 A.D. as witnessed by Gregory of Tours and other Fathers of the Church.[viii] Below is a quote that appropriately summarizes the connection between the Immaculate Heart of Mary and her assumption.

“On this special Feast, we are reminded of the flawless nature of Mary, the Mother of God. As the New Eve, Mary was created flawless, remained flawless throughout her life and was elevated to Heaven in her flawless state at the end of her earthly life. Consequently, the Holy Catholic Church proclaimed the dogmas of the Immaculate Conception and the Assumption of Mary in support of these truths.”[ix]

Some estimate that during the past 40 years there may be thousands of alleged apparitions every single year![x] This is an enormous number, reviling even the number of reported UFO sightings, and complicates the controversy over the Catholic dogma of the Assumption of Mary and the Immaculate Heart of Mary.[xi]

The Bible predicts that there will be an increase in deception in the end times and many will be deceived by lying signs and wonders. It is not surprising to see an increase in the number of apparitions appearing in more and more places throughout the world. Ultimately, Satan will use these Marian impostors to unite the world in a global religion.[xii]

Then one of the seven angels who had the seven bowls came and talked with me, saying to me, “Come, I will show you the judgment of the great harlot who sits on many waters, with whom the kings of the earth committed fornication, and the inhabitants of the earth were made drunk with the wine of her fornication.” … Then he [the angel] said to me, “The waters which you saw, where the harlot sits, are peoples, multitudes, nations, and tongues. (Revelation 17:1-2, 15 NKJV; emphasis added)

These Revelation passages inform that the great harlot will preside over many world leaders and inhabitants of the earth. At the apparent pinnacle of her prestige the great harlot of Mystery Babylon will be destroyed by “Ten Kings.”

And the ten horns which you saw on the beast, these will hate the harlot, make her desolate and naked, eat her flesh and burn her with fire. For God has put it into their hearts to fulfill His purpose, to be of one mind, and to give their kingdom to the beast, [Antichrist] until the words of God are fulfilled. (Revelation 17:16-17, NKJV; emphasis added)

Once the pagan religious system the harlot represents is devastated “the beast” [Antichrist] will establish the final world religion and along with a False Prophet force her forsaken followers to worship the beast.

It was granted to him [Antichrist] to make war with the saints and to overcome them. And authority was given him over every tribe, tongue, and nation. All who dwell on the earth will worship him, whose names have not been written in the Book of Life of the Lamb slain from the foundation of the world. (Revelation 13:7-8, NKJV; emphasis added).

Whereas before the great harlot sat over diverse tongues and nations, here we see that the Antichrist usurps his power over her former spiritual subscribers. The Antichrist will team up with a False Prophet and force people to worship their final world religious system.

He [False Prophet] causes all, both small and great, rich and poor, free and slave, to receive a mark on their right hand or on their foreheads, and that no one may buy or sell except one who has the mark or the name of the beast [Antichrist], or the number of his name. (Revelation 13:16-17, NKJV; emphasis added).

To discredit the Catholic “Mary”, her immaculate heart, assumption, and sightings would destroy the centuries old traditional teaching of the Catholic Church, discredit papal infallibility, and adversely affect Catholicism.

Not only would the denial of Mary’s Assumption cripple Catholicism, it would also detrimentally damage all groups still celebrating the assumption of Mary alongside Roman Catholic Church, such as, Eastern Catholic Churches, Eastern Orthodoxy, Oriental Orthodoxy, and parts of the Anglican Communion and Continuing Anglicanism.

Much like Shiite eschatology predicts the return of the Twelfth Imam (Mahdi) who died well over 1,000 years ago, Catholicism teaches Mary has returned to earth on numerous occasions. To teach that either Mary or the Mahdi has conquered or escaped the power of death, and are able to return to earth is blasphemous. Only Jesus Christ has authority over the power of death and the resurrection from death.

Pardon the pun, but the Catholic Church is in bed with whoever this demonic “Mary” imposter is, and probably the lesson to be learned from Revelation 2:20-22. Acts 4:12 is clear that there is only one name through which mankind can be redeemed and it’s not Mary. It’s Jesus Christ!

Many of the apparitions appear to be genuine, however unless hard proof can be provided that Mary didn’t die but was assumed up to heaven, the obvious conclusion to be made is that the apparitions are demonic in nature and intended to deceive humanity. This isn’t about Mary, the mother of Jesus, rather it’s about Satan’s attempt to dupe mankind.

And no marvel; for Satan himself is transformed into an angel of light. (2 Corinthians 11:14 KJV)

Some demonic being is masquerading as Mary in these last days and the segment of the Catholic Church that is seduced by her enchantments is in danger of being cast into the “Great Tribulation” unless they repent of their deeds according to Revelation 2:22.

To view a video on the Homily: Assumption of Mary click here.

[i] Accredited Mary Apparitions can be seen at this Internet link as of 8/12/11 http://www.catholicdoors.com/isit/approved.htm

[ii] Quote accessed over the Internet on 8/12/11 at: http://en.wikipedia.org/wiki/Assumption_of_Mary

[iii] Quote accessed over the Internet on 8/12/11 at: http://www.vatican.va/holy_father/pius_xii/apost_constitutions/documents/hf_p-xii_apc_19501101_munificentissimus-deus_en.html

[iv] Information accessed over the Internet on 8/12/11 at: http://www.papalencyclicals.net/Pius09/p9ineff.htm, and http://en.wikipedia.org/wiki/Immaculate_Conception

[v] St. Augustine quote accessed over the Internet on 8/12/11 at: http://en.wikipedia.org/wiki/Immaculate_Heart_of_Mary

[vi] Information about Saint Epiphanius of salamis was accessed over the Internet on 8/12/11 at:

[vii] Quote from Timothy of Jerusalem gathered over the Internet on 8/12/11 at this link: http://www.ourladyweb.com/mary-defended.html

[viii] Information from Gregory of Tours was accessed over the Internet on 8/12/11 at: http://www.thesacredheart.com/feastmar.htm

[xi] For a thorough examination of apparitions, refer to: Jim Tetlow, Messages From Heaven, Fairport, NY (book and DVD).

[xii] Comments contributed by Mike Gendron for the purposes of this Appendix. Mike’s website is http://www.pro-gospel.org/.