Introducing: Nuclear Showdown In Iran – The Ancient Prophecy of Elam

My friend, Bill Salus, has just authored an especially fascinating book relative to our time. NUCLEAR SHOWDOWN IN IRAN: The Ancient Prophecy of Elam points to a particular prophecy in the book of Jeremiah that the author believes foretells a devastating blow to a certain part of Iran –the area of ancient Elam.

His is a book that I strongly suggest anyone who wants to probe some powerfully insightful, and, I believe, Holy Spirit Directed thought should get and study carefully.

This article is the introduction to the new Bill Salus book. Click HERE to Pre-order Bill’s book today!

As world leaders script the final pages of human history, events foretold long ago continue to unfold. Amidst the backdrop of global uncertainties, one thing remains unchanged.

Ancient prophecies cleverly disguised in sovereign circumstances present wisdom to the wise. To Know or not to know, this is the question.

Nuclear Showdown in Iran, The Ancient Prophecy of Elam provides the reader with invaluable insights into the nearest future. This book reveals the potential relevance of an ancient prophecy concerning Iran’s nuclear program that has been vastly overlooked. Additionally, it explores and sequences other age old biblical predictions that are also about to happen.

There is a tug of war going on in the world’s next nuclear hotspot, and it’s partially political, but mostly spiritual. While Iran’s Islamic leaders experiment with the atom, scores of their countrymen embrace its maker. There is a crisis taking place in Iran, and it’s far more reaching than the mainstream news media is reporting. Seventh Century Islam and state censored media have finally met their match in Christian satellite TV.

Have you heard that miracles, visions and dreams are occurring with regularity, causing throngs of Iranians to convert to Christianity? From approximately 500 believers in 1979, to several million today, Iran is the fastest growing evangelical population in the world. Christianity is burgeoning so rapidly that the rogue Islamic regime has instituted harsh policies intended to curb its growth.

Over the past couple of years, home churches in Iran have been closed, pastors imprisoned, and believers severely persecuted. Meanwhile, the modern marvel of satellite TV is being directed by the Holy Spirit to transform Iran into a Christian nation.

Why should you care? Perhaps because,

• Ancient predictions are unfolding in modern times,
• Present paranormal events are shaping mankind for a supernatural future,
• Advanced human technologies are being manipulated by invisible forces,
• The Middle East Theater is being staged for the final showdown between good and evil. 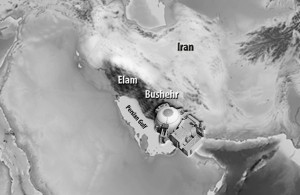 Not enough? Then what about,

• An uncontrollable nuclear arms race unleashed in the Middle East?
• Thousands of missiles launched into Israel?
• OPEC oil supplies cut off from world markets?
• Increased terrorism throughout the world?

Need more? Then imagine this,

As you can tell by now, this is not a bestselling woman’s devotional book. However, it is a biblically based manuscript that explains the prophetic relevance of certain key current events, and deposits hope for the reader throughout.

As you traverse through these pages, you will come face to face with a generally unrevealed prophecy. Evidence will be provided that enables you to decipher whether or not this prediction is meaningful to you. Painstaking lengths have been undertaken to provide the reader with ample research to make a final determination.

Hormoz Shariat, the man that Bible prophecy expert Joel Rosenberg calls, “The Billy Graham of Iran,” sits down with Bill Salus to discuss the supernatural conversion of Iran into a Christian nation. WATCH THE SPIRITUAL SHOWDOWN IN IRAN INTERVIEW BETWEEN BILL SALUS & HORMOZ SHARIAT.

Hormoz Shariat is a highly educated, American Iranian. He formerly lived in Iran until the Iranian revolution of 1979. Fortunately, he had left Iran just prior to the revolution to attend an American university. He became a Christian while living in America. As a child, he was raised in a Muslim household, and prior to coming to America, he was among the throngs of Iranian Muslims that would shout, “Death to Israel, the little Satan, and Death to America, the great Satan.”

Conversely, now as a Christian that is on fire for Christ, he utilizes satellite TV as a means to spread the gospel into the Middle East. Hormoz is the founder of Iran Alive Ministries. He penetrates through the ethereal airways over the turban wrapped heads of the Islamic Mullahs, and preaches the gospel into the Farsi speaking countries of Iran, Afghanistan and Tajikistan. It is probably no coincidence that these three countries rank among the top ten of the fastest growing evangelical populations in the world. Iran is #1, Afghanistan #2, and Tajikistan #10.

To learn more about the Spiritual Showdown taking place in Iran, order your copy of Nuclear Showdown in Iran, The Ancient Prophecy of Elam. Click HERE for more information.