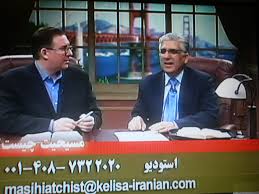 Hormoz Shariat, the man that Bible prophecy expert Joel Rosenberg calls, “The Billy Graham of Iran,” sits down with Bill Salus to discuss the supernatural conversion of Iran into a Christian nation.

Hormoz Shariat is a highly educated, American Iranian. He formerly lived in Iran until the Iranian revolution of 1979. Fortunately, he had left Iran just prior to the revolution to attend an American university. He became a Christian while living in America. As a child, he was raised in a Muslim household, and prior to coming to America, he was among the throngs of Iranian Muslims that would shout, “Death to Israel, the little Satan, and Death to America, the great Satan.”

Conversely, now as a Christian that is on fire for Christ, he utilizes satellite TV as a means to spread the gospel into the Middle East. Hormoz is the founder of Iran Alive Ministries. He penetrates through the ethereal airways over the turban wrapped heads of the Islamic Mullahs, and preaches the gospel into the Farsi speaking countries of Iran, Afghanistan and Tajikistan. It is probably no coincidence that these three countries rank among the top ten of the fastest growing evangelical populations in the world. Iran is #1, Afghanistan #2, and Tajikistan #10.

It is estimated that before the Islamic takeover of Iran in 1979, that there were about 500 Iranian Christians. However, now it is believed that over one million Iranians have become Christians. This estimate is probably very low. In actuality, there may be as many as three million Christian converts living inside of Iran. It is almost impossible to accurately assess the actual number.

Over the past couple of years, Christianity burgeoned in Iran to the point that the Islamic government proactively began closing down home churches and arresting pastors. The Iranian Christians are in desperate need of discipleship and Bibles. For many of them, the high point of their Christian daily walk is watching satellite TV shows like Shariat’s on Iran Alive.

To learn more about the Spiritual Showdown taking place in Iran, order your copy of Nuclear Showdown in Iran, The Ancient Prophecy of Elam. Click HERE for more information.

WATCH THE SPIRITUAL SHOWDOWN IN IRAN INTERVIEW BELOW.