Jesus said there would be wars and rumors of wars as the world approached His second coming. But does the Bible give us any details about these wars? In this two part radio show with Southwest Radio Church, Bill Salus explains America’s crucial role in the Psalm 83 war, the Ezekiel 38-39 Magog invasion, and the Armageddon campaign of the Antichrist.

According to ancient Bible prophecies a series of Mideast wars are coming and America plays a vital part in these apocalyptic battles. Will the USA support Israel and be divinely blessed, or will America put the Jewish state into harm’s way and come under divine judgment? AMERICA AND THE COMING MIDEAST WARS is a DVD that cuts to the biblical chase of what currently matters most in America and the Middle East. 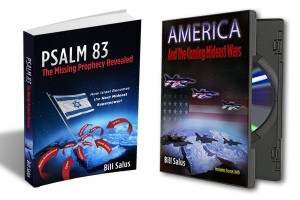 This important work incorporates two timely PowerPoint teachings and a series of television interviews by Bill Salus that explain the most relevant Bible prophecies for our time. These teachings are taken directly from Bill’s book entitled, Psalm 83 Missing Prophecy Revealed, How Israel Becomes the Next Mideast Superpower.

“THE FUTURE FOR ISRAEL, IRAN AND THE ARAB STATES,” is the first lesson on this two disc set, and it points out that Israel is the victor of a climactic concluding Arab-Israeli war predicted over 3000 years ago in Psalm 83. It also identifies the prophecies concerning the desolations of Egypt, Syria, Iran, and many other countries currently dominating the Mideast news.

“AMERICA’S ROLE IN THE COMING PROPHETIC WARS,” is the second teaching that explains America’s crucial role in the Psalm 83 war, the Ezekiel 38 Magog invasion, and the Armageddon campaign of the Antichrist. “BONUS DISC” The bonus DVD includes five TV interviews with Bill Salus that present additional information about the coming prophetic wars of the Bible.