Netanyahu’s Congressional Speech: How Important is it? 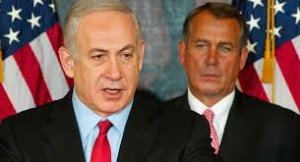 On March 3, 2015, Israeli Prime Minister Benjamin Netanyahu is coming to warn Congressional leaders and their America constituents about the dangers of Iran’s nuclear program. This speech will rank as one of the most necessary and important speeches in Israel’s history.

You are invited to listen to a radio interview with Bill Salus, hosted by Stacy and Randall Harp that explains the geo-political and biblical perspectives about Netanyahu’s concerns.