The Post-Rapture / Pre-Tribulation Time-Gap – (Part One)

This is a prophetic thesis by Bill Salus that is taken from his book called, Apocalypse Road, Revelation for the Final Generation.

This important study is presented in several parts and covers the 32 critical topics identified below. These events are concerned with the time interval that exists between the end of the Church Age and the beginning of the seven-year Tribulation Period, (Trib-Period). The Church Age concludes with the Rapture of the Church. Once the Church is caught up into the clouds to be with Christ, those left behind are plunged into this vastly overlooked time gap, which happens after the Rapture, but prior to the Trib-Period. 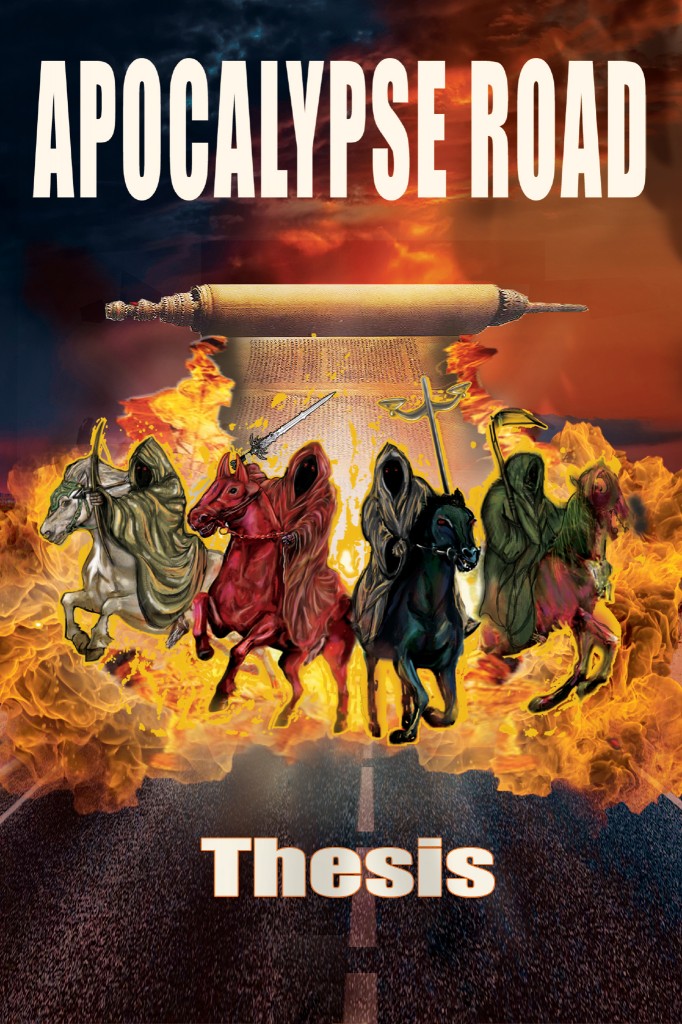 The Timeline image identifies the three books in the end time trilogy by Bill Salus. Revelation Road concludes with the end of the Church Age. Apocalypse Road covers the prophecies in the time-gap. Tribulation Road explores the seven-year Tribulation Period.

The 32 Post-Rapture / Pre-Tribulation topics below are listed in a specific chronological order.They are sequenced in this manner so that the reader can understand how each event paves the way for the related prophecy that follows. As such, it is not advisable to skip ahead to a latter topic.

(Part One)
1. Introduction to the Post-Rapture / Pre-Tribulation Thesis
2. What Will the World Look Like Shortly After the Rapture?
(Part Two) Click HERE to read Part Two
3. The Revealing of the Antichrist
4. The Church is in Heaven Before the Antichrist is Revealed on Earth
5. The Revealing of the Antichrist is Being Restrained
6. The Mystery of Lawlessness and the Lawless One
7. The Antichrist’s Rise to Political Power Takes Time
8. The Two Parties of the False Covenant
9. The Post-Rapture / Pre-Tribulation Timing of the Five Seals
10. First Seal: The White Horseman of the Apocalypse
11. Second Seal: The Fiery Red Horseman of the Apocalypse
12. Third Seal: The Black Horseman of the Apocalypse
13. Fourth Seal: The Pale Horsemen of the Apocalypse
14. Who are Death and Hades?
15. Is Islam the Fourth Horsemen of the Apocalypse?
16. Is Islam the Harlot World Religion?
17. Who are Death and Hades Killing?
18. Fifth Seal: The Martyrs of the Apocalypse
19. The Two Killing Crusades that Martyr Christians After the Rapture
20. How Do the Fifth Seal Saints Get Saved?
21. The Three Periods of Post Rapture Christian Martyrdom
22. Why is the Catholic Church Cast into the Great Tribulation?
23. How Will God Kill the Children of Thyatira?
24. The Main Obsessions of the Blessed Mother
25. Satan’s Plan to Influence Mankind Through the Harlot
26. Salvation Comes Through the Roman Catholic Church
27. The False Covenant of Death in Agreement with Sheol
28. What is the True Content of the False Covenant?
29. The Two Deadly Phases of the Overflowing Scourge
30. Phase One of the Overflowing Scourge – Isaiah 28:15
31. Phase Two of the Overflowing Scourge – Isaiah 28:18
32. Summary of the Two Phased Overflowing Scourge

This thesis is based upon the major premise that a gap of time exists between the Pre-Tribulation Rapture and the seven-year Tribulational Period (Trib-period). The minor premise is that it is not the Rapture, but the confirmation of a covenant by the Antichrist between Israel and some other party that triggers the ticking of the Trib-period. This covenant is identified primarily in Daniel 9:27 and Isaiah 28:15 and 18.

This dissertation is an integral part of the book entitled, “Apocalypse Road, Revelation for the Final Generation.” Together, the book and this treatise attempt to accomplish the following;

1. List and chronologically order the potential prophecies that fit into the Post-Rapture / Pre-Trib gap period, which is also referred to in this book and thesis as the “gap period.”

2. Determine how long the gap period could be from the clues provided in the prophecies that find fulfillment within this vastly overlooked period.

3. Set the world stage as it transitions from the Church age, which concludes with the Rapture, into the gap period that follows.

4. Explore the details, timing and purpose of the Gog of Magog prophecy of Ezekiel 38 and 39, in addition to;
a. Discover the location of the Valley of Hamon Gog as the burial grounds of the hordes of Gog, (Ezek. 39:11-16),
b. Reveal the potential connection between the Marian apparitions and Ezekiel 38. (Refer to the appendix called, The Marian Apparitions Connection with Ezekiel 38).

6. Identify Roman Catholicism as “Mystery, Babylon The Great, The Mother Of Harlots And Abominations Of The Earth” of Revelation 17:5.

7. Determine who the two parties are to the seven-year covenant that starts the Trib-period.

8. Define the true content on what is commonly called the false covenant of Daniel 9:27, as it pertains to the “overflowing scourge,” of Isaiah 28:15 and 18.

10. Identify the Two Witnesses of Revelation 11:3-13, and demonstrate how they serve as God’s rebuttal to the false covenant.

11. Most importantly, the sincerest goal of this timely and unique work is to forewarn and prepare EVERYONE for the SOON ARRIVAL of this treacherous Post-Rapture / Pre-trib gap period!

Many readers will get Raptured as true believers of Jesus Christ before this gap period commences. The good news is that they will not personally face the frightening events that are forthcoming in the gap period. The bad news is that someone they love will!

This work has been specifically designed to stimulate the mind and pulsate the heart of believers, and to invigorate their love for the lost. Careful consideration in that regard has gone into the overall content of this entire composition. If you are concerned about the eternal destiny of an unsaved loved one, then consider Apocalypse Road as your invaluable guidebook for these last days. The biblically supported scenarios within this book will embolden you to share the good news about Jesus Christ with the ones you love.

(Topic #2) – What Will the World Look Like Shortly After the Rapture?

After the Rapture, humankind will enter a new era. The paranormal will become the new normal, the supernatural will swiftly seem more natural, and what was once considered futuristic rapidly becomes very realistic. This is because the Rapture is a miraculous event and Satan immediately follows it up with powerful lying signs and wonders.

The worldwide disappearances of millions of believers will likely warrant more than a simple scientific explanation. The spiritual and prophetic implications surrounding the event will necessitate a religious response. Satan realizes this and, after the Rapture, he has a campaign filled with supernatural surprises ready to be promptly put in place. According to 2 Thessalonians 2:6-7, nothing after the Rapture will hinder the double religious jeopardy that the Devil has prepared to deceive mankind.

First, the Harlot world religion of Revelation 17 will surface and after it has overextended its usefulness, it becomes desolated by ten kings in Revelation 17:16. This appears to happen at the mid-point of the Trib-period, which means that the reign of this false global religion likely begins during the gap period, but concludes in the middle of the Trib-period. When the Harlot is dethroned, the Antichrist becomes fully enthroned. He hails over the second global system described in Revelation 13. Satan has devised a one-two punch that people left behind won’t expect, but many sadly will accept.

In the immediate aftermath of the Rapture, the world will become increasing unruly as lawlessness is predicted to increase. Wars occur as world peace departs as per the opening of the second seal in Revelation 6:3-4. These catastrophic global conditions facilitate the emergence of the “Lawless One,” which is another title of the Antichrist. His introduction into the world theater is among the first order of events to occur after the Rapture. This crazed world leader is the White Horseman of the Apocalypse described in the first seal in Rev. 6:1-2.

All the things described in above paragraph closely parallel the predicted events in 2 Thessalonians.
Do you not remember that when I was still with you I told you these things? And now you know what is restraining, that he may be revealed in his own time. For the mystery of lawlessness is already at work; only He who now restrains (lawlessness) will do so until He is taken out of the way. And then the lawless one (Antichrist) will be revealed, whom the Lord (Jesus Christ) will consume with the breath of His mouth and destroy with the brightness of His coming. The coming of the lawless one is according to the working of Satan, with all power, signs, and lying wonders, and with all unrighteous deception among those who perish, because they did not receive the love of the truth, that they might be saved. (2 Thessalonians 2:5-10; emphasis added)

Summary: The World Shortly After the Rapture

With the disappearances of believers, the world clock nears midnight. Ancient biblical prophecies, which were intended to be fulfilled in the last days, will begin to roll off their parchments and pound onto the pavement in relatively rapid succession. Each one has the potential to pack a more powerful punch that the one that preceded it.

Many people who were left behind will wonder where the believers went. As they attempt to return to their normal lives, a paranormal reality promises them an uncertain future. Global chaos will be mounting, which will necessitate the formation of a world government to restore international order. The stage will be set for Satan to send his point man, the Antichrist, into the world theater, and that’s exactly what he does!