This is part two of a prophetic thesis by Bill Salus that is taken from his book called, Apocalypse Road, Revelation for the Final Generation.

Before reading part two, it is important to have already read part one. This prophetic dissertation contains 32 sections that are specifically designed to be read in consecutive parts. It is not advisable to skip any of the preceding sections because they all serve as building blocks to further the reader’s understanding of Post-Rapture / Pre-Tribulation Time-gap! CLICK HERE to read (Part One)

(Topic 3) – The Revealing of the Antichrist

One of the first things that happens after the Rapture is the revealing of the Antichrist. The consensus among many Bible prophecy experts is that he shows up with the opening of the first seal. 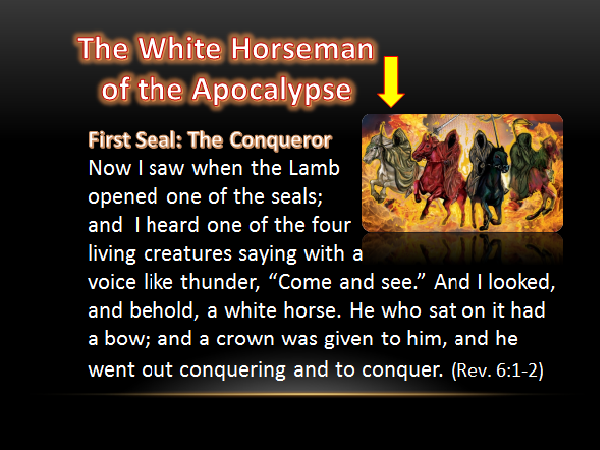 Now I saw when the Lamb opened one of the seals; and I heard one of the four living creatures saying with a voice like thunder, “Come and see.” And I looked, and behold, a white horse. He who sat on it had a bow; and a crown was given to him, and he went out conquering and to conquer. (Revelation 6:1-2)

There are at least two important questions to ask and address concerning this event.

This section explains why the opening of the first seal probably happens in the gap period and does not likely trigger the start of the seven-year Trib-period. These conclusions are supported by the following reasons.

First, the church is pictured in heaven before the first seal is opened, which means that the Rapture has previously occurred. Second, the Antichrist’s rise to political power takes time. Third, the other party to the false covenant of Daniel 9:27 factors into prophecy after the first seal has already been opened. The Trib-period doesn’t commence until after this covenant is made between Israel and another party. The role of the Antichrist in this scenario is to confirm this covenant between the two parties.

The Christian Church is residing in heaven before the tribulation period commences. This conclusion is supported by understanding the chronological ordering of chapters two through six in the book of Revelation. Revelation 2 and 3 describe the Church on earth while Revelation 4 and 5 pictures the Church residing in heaven. Revelation 6 introduces the earthly events that occur after the Christian Church has been removed from the earth via the Rapture. The prophecies in Revelation 6 segue into the Trib-period. The details of this ordering are explained below.

Revelation 2 and 3 contain the seven letters to the seven Churches. These letters had multiple applications at the time of their issuance. First, they provided important individualized information for the seven specific Churches that they were addressed to. Second, these letters detailed the distinguishing characteristics that would exist at any given time within various Churches throughout the Church age. Third, they outlined the prophetic future of the Church age. These two chapters portrayed the Church during its existence on earth during the Church age from its inception until its completion. More information on this topic is provided in the Appendix entitled, “The Seven Letters to the Churches.”

“After these things (meta tauta) I (the apostle John) looked, and behold, a door standing open in heaven. And the first voice which I heard was like a trumpet speaking with me, saying, “Come up here, [representing the rapture] and I will show you things which must take place after this.” (Revelation 4:1, NKJV; emphasis added).

It is commonly taught that the twenty-four elders, who are identified several times in Revelation 4 and 5, represent the Church in heaven. Revelation 5:9 informs that these elders are redeemed by the blood of Christ. Only true believers are qualified to make such a salvation claim. Moreover, these redeemed are “out of every tribe and tongue and people and nation.” This is an acknowledgement that the twenty-four elders represent the believers saved throughout the world during the Church age.

Quoted below, is how noted Bible prophecy scholar Dr. Arnold Fruchtenbaum interprets the identity of the twenty-four elders.

“While the text does not clearly state as to what these twenty-four elders refer, there are clues in the text by which their identity can be deduced. First, these elders are clothed with white garments, which throughout the Revelation are symbols of salvation. Celestial beings before the throne of God do not need salvation for they were not lost to begin with. But these elders were at one time lost and at some point received salvation as is seen by their wearing of the white garments. The second clue is the fact that they are wearing crowns. These crowns are not diadem crowns worn by those who are royal by nature, which would have been the case had these been celestial beings. These crowns are the stephanos crowns, the crowns of an overcomer; the type of crown given as rewards to the members of the church at the Judgment Seat of Christ. A third clue lies in their very title of elders. Nowhere else in Scripture is this term used to describe celestial or angelic beings. This term is used of humans in positions of authority either in the synagogue or church. Hence, from these three clues, the twenty-four elders must represent the church saints. If this is true, then they provide further evidence for a pre-tribulation Rapture. The church is already in heaven in chapter four and five before the tribulation begins in chapter six.”(i)

Sometime after the Church gets caught up into heaven, the events described in Revelation 5 commence. One very significant event that the twenty-four elders witness is the opening of the heavenly scroll by Jesus Christ. This scroll contains the seven seal judgments. The first seal judgment, which is described in Revelation 6:1-2, introduces the Antichrist upon the earth. As per Daniel 9:27, the Antichrist confirms a covenant with Israel for seven years. It is commonly taught that the ratification and implementation of this covenant becomes the starting point of the seven years of the tribulation period.

Therefore, it can be concluded that only when the Church resides in heaven, can it watch Christ open the scroll that contains the seven seal judgments. Until these seal judgments are opened, the Antichrist can’t emerge upon the world scene and confirm the seven-year covenant with Israel. As long as the covenant can’t be confirmed, the tribulation period can’t commence. Simply stated, the Antichrist won’t be revealed and the tribulation period can’t begin until sometime after the Christian Church has been raptured into heaven.

(Topic 5) The Revealing of the Antichrist is Being Restrained

2 Thessalonians 2:5-8, points out that the “lawless one” can’t be revealed until the restrainer is removed.

Do you not remember that when I was still with you I told you these things? And now you know what is restraining, that he may be revealed in his own time. For the mystery of lawlessness is already at work; only He (the one presently restraining lawlessness) who now restrains will do so until He is taken out of the way. And then the lawless one (the Antichrist) will be revealed, whom the Lord (Jesus Christ) will consume with the breath of His mouth and destroy with the brightness of His (second) coming. (2 Thess. 2:5-8; emphasis added)

(Topic 6) The Mystery of Lawlessness and the Lawless One

There are at least three mysteries exposed in the New Testament that find a Pre-trib fulfillment. One of them happens before the gap period and the other two appear to begin in the gap period. They are the Mysteries of the Rapture, (1 Corinthians 15:50-52), Lawlessness, (2 Thess. 2:7), and Babylon, (Revelation 17:5-7). Once the Rapture becomes a reality, the stage is set for the fulfillment of the other two. The “mystery of lawlessness” is presented here because it is relevant to the timing of the revealing of the lawless one.

The Greek word for mystery is “musterion,” and it is translated as a mystery or secret doctrine. Lawlessness, also translated as iniquity in some translations, is the Greek word, “anomia.” It is used 13 times in the New Testament. It is defined as sin in 1 John 3:4. However, the fact that lawlessness is sin is not a mystery. So, the question arises; why did the apostle Paul label lawlessness as a mystery?

The common interpretation of a biblical mystery is that it is something that was not disclosed in the Old Testament, but is now exposed in the New Testament. A mystery in this case is information that is solely privy to God until He makes it known to the public, mostly through the Holy Scriptures. Some mysteries deal with future events. Once the future episode finds fulfillment, it becomes a reality and ceases to be a mystery. It becomes an actuality to the generation that witnesses its fulfillment. For instance, once the Rapture happens, it can no longer be classified as a mystery because it has become a historical fact.

A summary of what lawlessness is, as per its thirteen usages in the New Testament, is provided below.
Lawlessness is the opposite of righteousness, (2 Corinthians 6:14). It is an integral part of Satan’s end time scheme, (2 Thess. 2:1-10). It characterized the condition of the scribes and Pharisees at the time of the first coming of Christ, (Matthew 23: 27-28). Similarly, it becomes implanted into the Kingdom of God prior to the second coming of Christ. Like tares adversely affect the wheat during harvest time, Satan uses lawlessness as a stumbling block to harm the people of God in the last days, (Matt. 13:36-43). When lawlessness goes unrestrained in the end times, it metastasizes into its most cancerous condition, causing the love of many throughout the world to grow cold, (Matt. 24:12). It’s only cure is forgiveness through Jesus Christ, (Romans 4:7, Hebrews 10:17).

Lawlessness is so bad that it must be restrained, for the overall good of the Church while it exists upon the earth. The Church is not appointed to experience lawlessness when it spreads throughout the world without further hindrance, and that’s why it is Raptured out beforehand. As per 1 Thess. 5:9, the Church is likewise not appointed to the wrath of God, however lawlessness is not poured out by God, rather it is unleashed according to the working of Satan, with all power, signs, and lying wonders, and with all unrighteous deception among those who perish, (2 Thess. 2:9-10; abbreviated).

A lawless world provides the ideal environment through which the seed of Satan can incubate. The seed of Satan is another name for the Antichrist used in Genesis 3:15. Therefore, the lawless one is introduced into the end times equation in the immediate aftermath of the removal of the restraint of lawlessness. With the opening of the first 5 seal judgments, lawlessness no longer remains a mystery, but becomes a global reality.

The breakdown goes as follows;

1. The Lawless one is revealed with the opening of the first seal, which evidences that lawlessness is no longer restrained, but is dispersing rapidly throughout the world,
2. This unhindered spread of evil disrupts world peace, giving rise to war(s) as per the second seal,
3. Impoverished conditions plague the planet because of the first two seals, during the third seal,
4. A global government, which is made up of an unholy Church and State alliance, forms to remedy the dire situation in the fourth seal,
5. True believers get martyred for their Christian testimonies by the world government, which is perpetrating lawlessness and suppressing the truth about Christ. God allows these believers to die for their faith, because He is no longer restraining lawlessness, like He did during the Church Age. In Revelation 6:11, 13:10 and 14:12, Jesus instructs His Post-Rapture followers to be patient until He physically returns in His second coming.