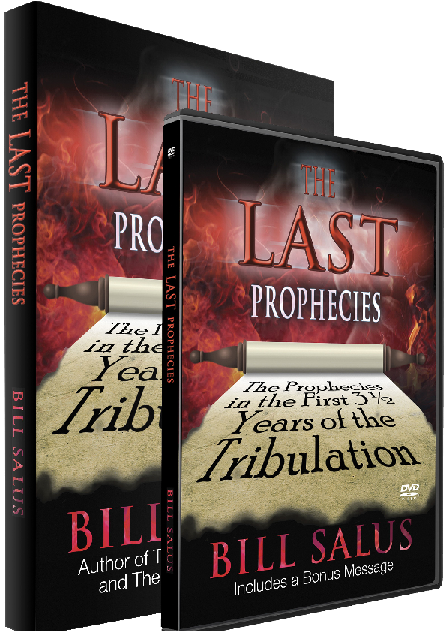 This article was taken from the book entitled, The LAST Prophecies: the Prophecies in the First 3 1/2 Years of the Tribulation. (Watch the trailer at the end of this article).

Jesus Christ makes this distinction in His Olivet Discourse. In Matthew 24:3, the disciples ask Christ the following questions, “Tell us, when will these things be? And what will be the sign of Your coming, and of the end of the age?”

“And Jesus answered and said to them: “Take heed that no one deceives you. For many will come in My name, saying, ‘I am the Christ,’ and will deceive many. And you will hear of wars and rumors of wars. See that you are not troubled; for all these things must come to pass, but the end is not yet. For nation will rise against nation, and kingdom against kingdom. And there will be famines, pestilences, and earthquakes in various places. All these are the beginning of sorrows.” (Matthew 24:4-8; emphasis added)

The First 3 1/2 Years of the Tribulation Period 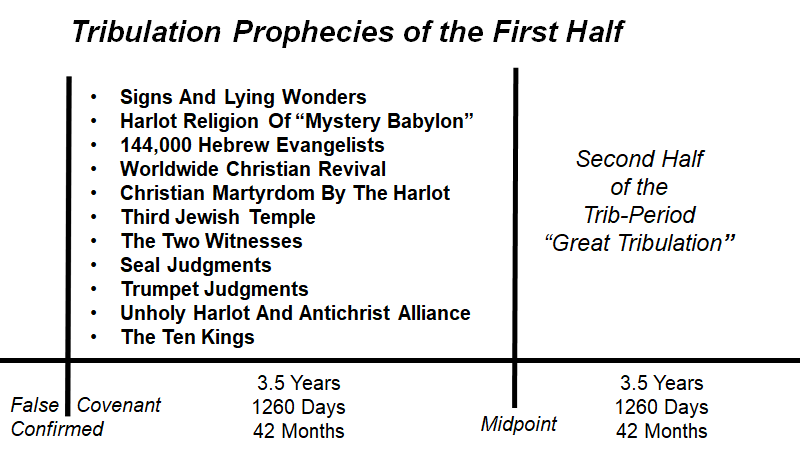 “Then, (after the beginning of sorrows and when the end is not yet come), they will deliver you up to (the) tribulation (period) and kill you, and you will be hated by all nations for My name’s sake. And then many will be offended, will betray one another, and will hate one another. Then many false prophets will rise up and deceive many. And because lawlessness will abound, the love of many will grow cold.” (Matthew 24:9-12, NKJV; emphasis added)

At the start and throughout the Trib-period there will be Christian martyrdom that is accompanied by an unprecedented increase in lawlessness, which according to 1 John 3:4 is sin. This verse reads, “Whoever commits sin also commits lawlessness, and sin is lawlessness.”

Matthew 24:9-12 acknowledges that true believers in the Trib-period will be hated and killed for their genuine faith in Christ. This persecution will include Jewish and Gentile believers. In the first half of the Trib-period the primary means of Christian martyrdom will be committed by the Ecclesiastical Babylon. The Harlot’s hands will be stained with the blood of believers. (Observe that together with the Gentile believers the Messianic Jewish believers are being specifically referred to in this scenario and not necessarily the Jewish people in general).

At the midpoint of the Trib-period, the Harlot’s religious system is abolished by the ten kings, who in turn submit their power and authority into the Antichrist’s kingdom.

“And the ten horns, (kings) which you saw on the beast, these will hate the harlot, make her desolate and naked, eat her flesh and burn her with fire. For God has put it into their hearts to fulfill His purpose, to be of one mind, and to give their kingdom to the beast, until the words of God are fulfilled.” (Rev. 17:16-17; emphasis added)

The hatred and killing of believers continues into the second half of the Great Tribulation, but this period of martyrdom is executed by the Antichrist, who will behead “the saints” in Revelation 20:4 who refuse to worship him and take his “mark of the beast” in Revelation 13:15-18.

Jesus informs of the other key concern that occurs during the Trib-period. He warns that “lawlessness will abound, the love of many will grow cold.” According to 2 Thessalonians 2:3-12, lawlessness:

• Is currently being restrained in the Church Age,
• Will be UNRESTRAINED in the Trib-period,
• Will give rise to the “lawless one,” who is the Antichrist,
• Will be rooted in “the working of Satan, with all power, signs, and lying wonders, and with all unrighteous deception among those who perish.”

The Second 3 1/2 Years of the Great Tribulation Period

In Matthew 24:9, Christ uses the Greek “Thlipsis” to reference the start of the Trib-period. It can be translated as tribulation, affliction, distress, or persecution. Subsequently, in Matthew 24:21-22, He enjoins the Greek words “megas-thlipsis.” This is translated as “Great Tribulation.” The word megas means great, greater, greatest, more important, severe or stricter. Christ inserts “megas thlipsis” to differentiate from the severe tribulation of the first half of the Trib-period, to contrast the even greater tribulation that occurs within the second half. 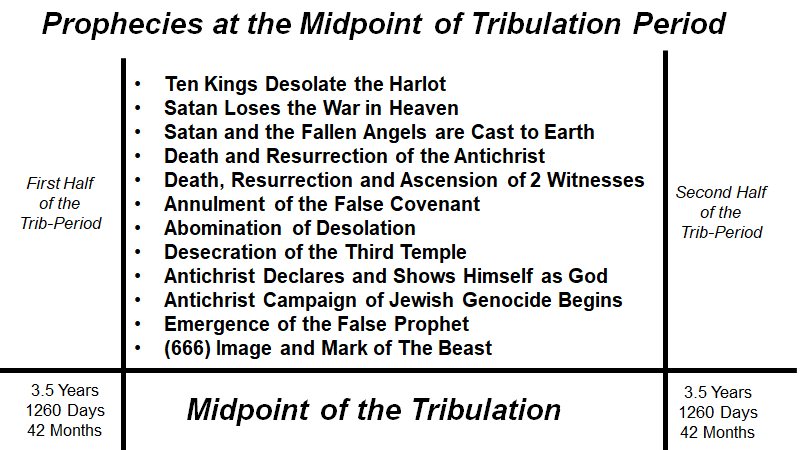 For then, (referring to the second half of the Trib-period after the Abomination of Desolation in Matthew 24:15 has occurred), there will be great, (megas), tribulation, (thlipsis), such as has not been since the beginning of the world until this time, no, nor ever shall be. And unless those days were shortened, no flesh would be saved; but for the elect’s sake those days will be shortened.” (Matthew 24:21-22, NKJV; emphasis added)

Lastly, Christ uses the word tribulation a third time in this sequence of Matthew 24 passages. This final usage explains the cosmic events that happen at the end of the Trib-period that segues into His Second Coming.

“Immediately after the tribulation of those days the sun will be darkened, and the moon will not give its light; the stars will fall from heaven, and the powers of the heavens will be shaken. Then the sign of the Son of Man will appear in heaven, and then all the tribes of the earth will mourn, and they will see the Son of Man coming on the clouds of heaven with power and great glory.” (Matthew 24:29-30) 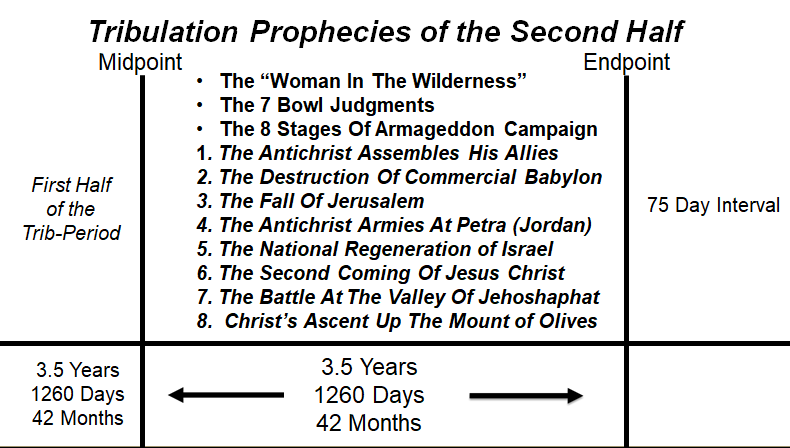 The Greek words “megas thlipsis” are translated as “Great Tribulation” in Revelation 2:22 and 7:14 quoted below. Both of them appear to allude to prophetic events that take place in the second half of the Trib-period.

“And I gave her time to repent of her sexual immorality, and she did not repent. Indeed I will cast her into a sickbed, and those who commit adultery with her into great tribulation, unless they repent of their deeds.” (Rev. 2:21-22, NKJV; emphasis added)

These above verses are addressed to the Church of Thyatira, which I point out my book entitled, The Next Prophecies, appear to have a prophetic correlation with the Catholic Church as the head of end times Ecclesiastical Babylon. If my assessment is correct, the Catholic Church will be left behind as a religious institution and will ultimately wind up in the “Great Tribulation” period.

“And I said to him, “Sir, you know.” So he said to me, “These are the ones who come out of the great tribulation, and washed their robes and made them white in the blood of the Lamb.” (Rev. 7:14, NKJV; emphasis added) 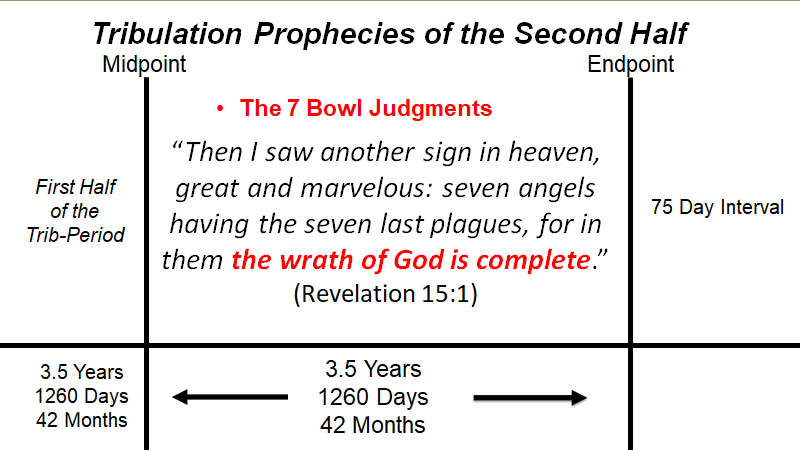 Lastly, it’s important to note that Revelation 15:1 declares that God’s wrath is completed in the outpouring of the Seven Bowl Judgments. These judgments occur during the Great Tribulation period, which further evidences the severity of the events that happen in the second 3 1/2 years of the Trib-period.

WATCH THE LAST PROPHECIES TRAILER BELOW.