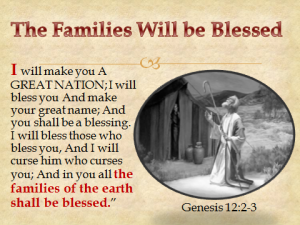 It was about four-thousand years ago that a seventy-five year old man named Abram lived in a very pagan world. At that time the merciful God Jehovah called out to him and instructed him to pack up his household and depart for a better land that would be given to him.

Now the LORD had said to Abram: “Get out of your country, From your family And from your father’s house, To a land that I will show you. I will make you a great nation; I will bless you And make your name great; And you shall be a blessing. I will bless those who bless you, And I will curse him who curses you; And in you all the families of the earth shall be blessed.” (Genesis 12:1-3, nkjv)

Abram wisely heeded the Lord’s instructions and proceeded to locate this Promised Land, and as a result people began referring to him as “The Hebrew,” which identified him as the man who “passed over” from idolatry to follow his God Jehovah.(i) Abram received further assurance that he was on the right track, when at the seasoned age of ninety-nine (ii) his God gave him the new name of Abraham, which identified him as a “father of multitudes.”

“Neither shall thy name any more be called Abram, but thy name shall be Abraham; for the father of a multitude of nations have I made thee.” (Genesis 17:5, asv)

In the ancient world Abraham gained renown as the father of multitudes that passed over from ungodly men to become a man of God. Romans 4:9 points out that Abraham’s genuine faith in God, was accredited to him as righteousness by God. Henceforth, humanity was comprised of Abraham and his descendants, referred to as Hebrews, and everybody else was called Gentiles.(iii)

Concerning the seed of Abraham: “In your seed all the nations of the earth shall be blessed, because you have obeyed My voice.” (Gen. 22:18, nkjv)

Concerning the seed of Abraham’s son Isaac: “And I will make your descendants multiply as the stars of heaven; I will give to your descendants all these lands; and in your seed all the nations of the earth shall be blessed;” (Gen. 26:4, nkjv)

Concerning the seed of Abraham’s grandson Jacob: “Also your descendants shall be as the dust of the earth; you shall spread abroad to the west and the east, to the north and the south; and in you and in your seed all the families of the earth shall be blessed.” (Gen. 28:14, nkjv)

Concerning the seed of Abraham’s great grandson to the eleventh generation; King David:(iv) “When your days are fulfilled and you rest with your fathers, I will set up your seed after you, who will come from your body, and I will establish his kingdom. He shall build a house for My name, and I will establish the throne of his kingdom forever.” (2 Samuel 7:12-13, nkjv)

Concerning the seed of Abraham through David; Jesus Christ: “And behold, you will conceive in your womb and bring forth a Son, and shall call His name Jesus. He will be great, and will be called the Son of the Highest; and the Lord God will give Him the throne of His father David. And He will reign over the house of Jacob forever, and of His kingdom there will be no end.” (Luke 1:31-33, nkjv)

In summary, if someone wants to receive earthly blessings, they should bless Israel, because the Jews are Abraham’s descendants. More importantly, those who seek eternal blessings need to receive Jesus Christ as their Savior. In my book called Psalm 83 – The Missing Prophecy Revealed, How Israel Becomes the Next Mideast Superpower, I devote a lengthy appendix to the importance of salvation, and how to achieve the assurance of receiving it. This appendix was taken from an article of mine called “The Sinner’s Salvation Prayer,” which can be read at this LINK.

……………………
(i) Genesis 14:13 – The definition of the word Hebrew as, “to pass over,” was taken from the Easton Bible Dictionary.
(ii) Genesis 17:1
(iii) The Hebrew word for Gentiles is “goy,” and it can mean heathen, nation, or people according to Strong’s Hebrew and Greek Dictionaries.
(iv) Matthew 1:2-6 outlines Abraham’s genealogy on through to King David.