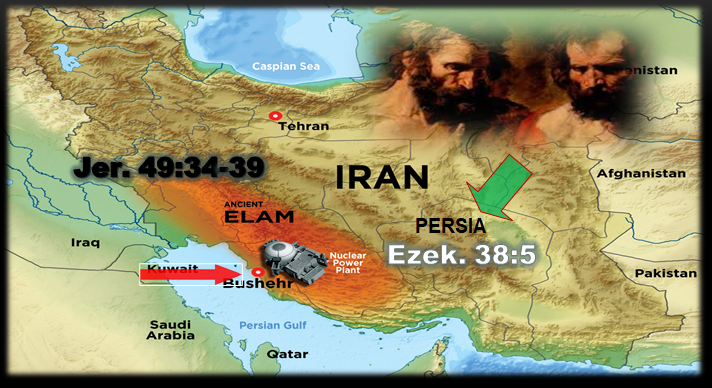 In light of current events involving Iran’s rapidly escalating nuclear program, many prophecy buffs are asking their favorite Bible experts how they interpret Jeremiah 49:34-49. The prophecy informs of a disaster, potentially nuclear, that happens in the ancient territory of Elam.

According to a long forgotten prophecy, Iran appears to be the subject of two differing end time’s prophecies. One prophecy is described in Jeremiah 49:34-39 concerning ancient Elam, and the other is in Ezekiel 38 regarding Persia. This article denotes the differences between Jeremiah 49:34-39 and Ezekiel 38 and 39. Several of these dissimilarities are substantial, which suggests that Jeremiah and Ezekiel are not describing the same prophetic event. This article will also point out why the Psalm 83 prophecy does not appear to be part of either Ezekiel 38 or Jeremiah’s prophecy of Elam.

Jeremiah issued his prophecies concerning Elam about 596 BC. Jeremiah wrote about Elam about a decade before his contemporary Ezekiel prophesied about Persia in Ezekiel 38:5. Ezekiel’s ministry spanned between 595-573 BC. (i) Modern day Iran is comprised of ancient Elam and Persia. Ezekiel was familiar with Elam according to Ezekiel 32:24-25, but he did not include Elam in the lineup of invaders in Ezekiel 38. As the remainder of this article points out, Elam was probably intentionally omitted, because it is the subject of its own distinctly different prophecy, outlined by Jeremiah

Others like Joel Rosenberg, Bill Koenig, Dr. Arnold Fruchtenbaum, Dr. John Walvoord, Arno Gaebelein and myself believe the entire prophecy remains unfulfilled. Below are a few quotes that are followed by a short video that argues that the prophecy has not yet happened.

“Jeremiah 49:34-39. The prophecy concerning Elam referred to an area east of Babylon, known today as Iran. The destruction of Elam was described as breaking her bow, for, like Kedar, Elam was noted for archery. The complete destruction of Elam does not seem to have been fulfilled in history and may have its final chapter in the future in connection with the judgements at the second coming of Christ. Elam was promised, however, restoration ( v 39).” (Dr. John Walvoord – Every Prophecy of the Bible – Page 151)

“The final prediction is as to Elam. Elam was east of South Babylonia and the lower Tigris, later known as Susians. This prophecy was given at the beginning of Zedekiah’s reign. Elam became an ally of the Persian kingdom. Here her overthrow is foretold as well as her restoration “in the latter days.” (Arno Gaebelein – Gaebelein’s Annotated Bible 1922)

Below are a couple slides from the video above. 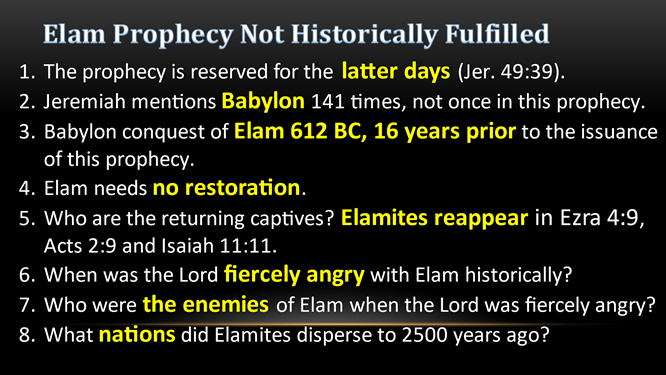 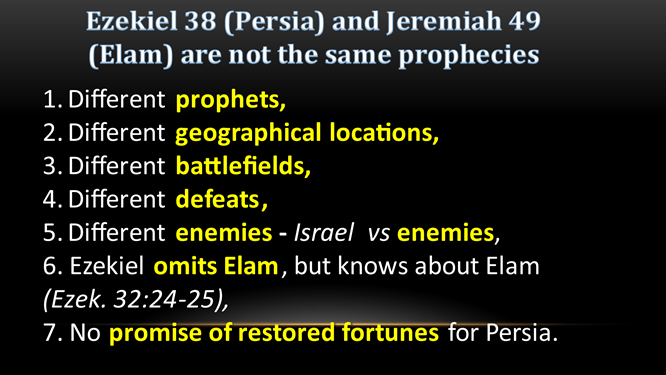 The events described in Jeremiah 49:34-39 take place inside of the borders of Iran. Jeremiah 49:35 informs that Iran is struck at the foremost of its might and this causes Iranian refugees to seek exile outside of their homeland.

Jer. 49:36 predicts that “the four winds from the four quarters of heaven” will be brought “against Elam.” Jer. 49:37 declares that the “disaster” comes “upon” the Iranians. Jer. 49:38 informs that the Lord will “set” His “throne in Elam.” These prophecies are geographically specific. They must occur within the borders of Elam, which is the Central Western region of modern day Iran. (See map below).

Conversely, the Ezekiel 38 and 39 invasion, from start to finish, takes place in Israel according to Ezekiel 38:8, 16, 18, and 19 and Ezekiel 39:2, 4, 9, 11, and 17. At the time of the Ezekiel invasion, Israel may have enlarged their borders as a result of an IDF victory over the Psalm 83 countries, but there is no biblical basis to believe that any part of modern day Iran will be part of a future greater Israel.

There is one possible exception to the argument that Ezekiel 38 happens entirely within Israel, and it is found in Ezekiel 39:6 which says, “And I will send fire on Magog and on those who live in security in the coastlands.” However, the “coastlands,” already mentioned several times by Ezekiel (cf. Ezek. 26:15, 18; 27:3, 6-7, 15, 35), imply the farthest reaches of the known world.” (ii)

According to Ezekiel 38:22, the LORD supernaturally defeats the Magog invaders, but Jeremiah 39:37 it appears that Elam is defeated militarily by the sword of its enemies. Also, the Lord defeats the Ezekiel 38 invaders to make His Holy Name known to mankind as per Ezekiel 39:7, but Jeremiah 49:34-39 points out that the Lord creates a disaster in order to destroy the bad rulers of Elam and to prevent them from launching something lethal somewhere. We are not told where the bow(s) are pointed, but it’s likely referring to missiles destined for Israel.

NO PROMISES OF RESTORED FORTUNES FOR PERSIA, ONLY ELAM

Another important difference is that Jeremiah 49:39 promises that the territory of Elam will be restored and the Elamite exiles will return. However, nowhere in scripture do we find a similar promise about Persia. Also, the Lord promises to establish His throne in Elam according to Jeremiah 49:38, but no such promise is ever made to Persia in Ezekiel 38. 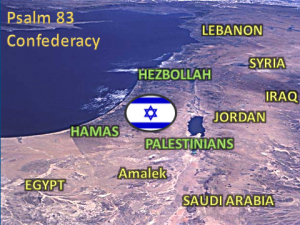 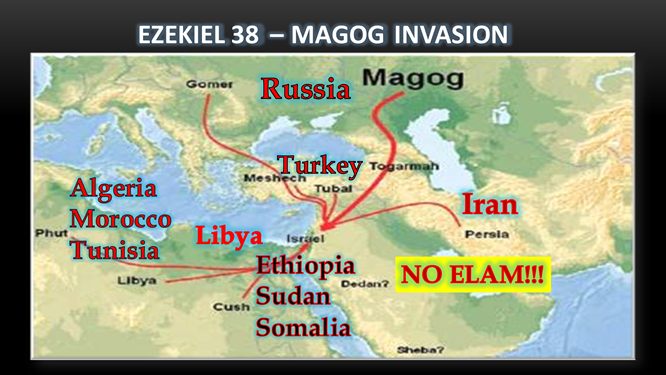 With the exceptions of Meshech and Tubal, Ezekiel 38 and 39 provides a lengthy list of entirely different populations than Ezekiel 32. These two peoples from Meshech and Tubal are alluded to in both Ezekiel 32 and Ezekiel 38. The image points out that Elam is not identified among the Ezekiel 38 invaders. Did Ezekiel intentionally omit Elam? If so, is this because, like the Psalm 83 populations, Elam is the subject of its own end times prophecy?

At this point, it’s important to discuss Iran’s double jeopardy in the latter days. Iran is the subject of dual judgment prophecies, one in Jeremiah 49:34-39, and the other in Ezekiel 38 and 39. This means that the rogue nation will experience double trouble in the end times. Ezekiel 38:8,16 and Jeremiah 49:39 use the same Hebrew words to identify these as latter days events.

Important questions to answer are:

These and many other questions are answered in the Nuclear Showdown in Iran, Revealing the Ancient Prophecy of Elambook. Several other important distinctions between Ezekiel 38 and Jeremiah 49:34-39 are also pointed out in the book.